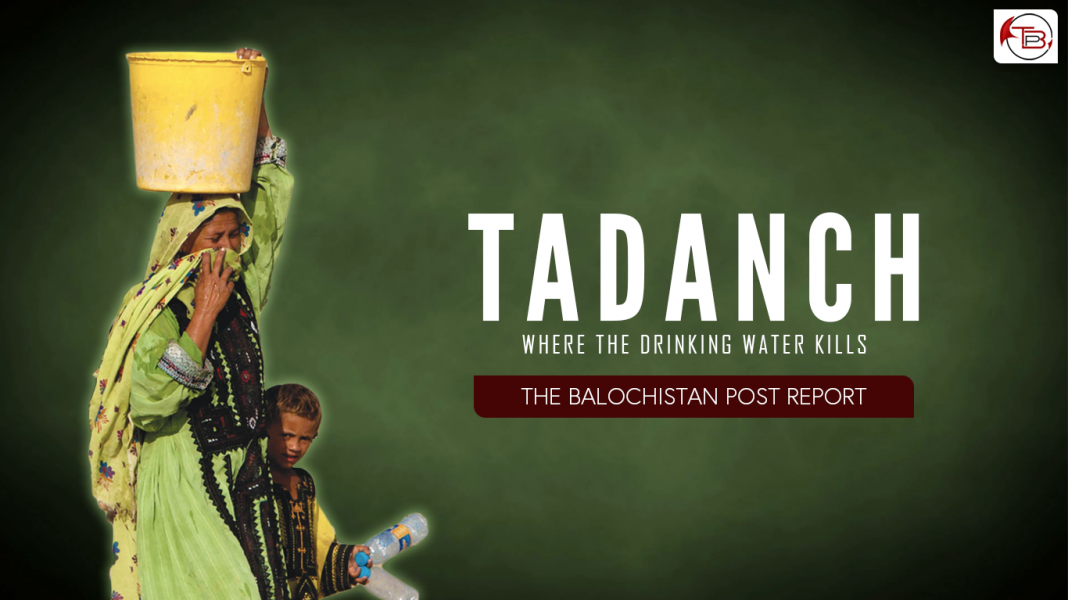 Tadanch – Where the drinking water kills

It was beyond comprehensible turn of events for inhabitants of Tadanch, when, according to some reports, nearly 20 people died and more than 150 others reached the brink of death within a span of only few days. It is now estimated that the number of deaths could rise.

The far-flung area of Tadanch, which is located in Jhao district of Awaran, has a total population of less than 400, who live in 9 to 10 small villages. There are neither health facilities nor any mobile signals in the area. For even small errands the villagers travel for days on camels and donkeys to the city of Bela.

In Balochistan, where 85% of population does not have access to clean water, diseases connected with polluted drinking water such as diarrhoea, gastroenteritis, typhoid, cryptosporidium infections, giardiasis intestinal worms and others are very common. The infant mortality rate here is one of the highest in the world.

In absence of any infrastructure to provide clean drinking water, the people of Tadanch resort to using polluted drinking water. The only source of drinking water is the natural reservoirs which accumulate the rare rain water. The livestock and humans drink from the same ponds.

Though Balochistan’s serving Chief Minister Abdul Qudoos Bizenjo hails from the constituency that includes Tadanch, but the only help that arrived in the area after numerous deaths and hundreds of serious cases was from a non-governmental organisation called Edhi foundation.

Is polluted drinking water the only culprit behind such deaths? Baloch political circles are levelling some very serious allegations. They claim that the water reservoirs in the area cannot be contaminated overnight to an extent that people die straightaway. But the whole incident was preplanned to force people to evict the area. There are similar opinions by some local people too. Is there any truth in these allegations? TBP tried to find answers.

Dil Murad Baloch is a very active political leader. He is the spokesman of Balochistan’s largest pro-independence political party Baloch National Movement. Hailing from the region, he has spent years in Jhao and Awaran as an activist. The Balochistan Post exclusively spoke to him to take his views regarding the recent events in Tadanch.

But why would the military want people to leave the area? We asked Dil Murad Baloch.

‘The military has been trying to move people from rural areas to areas that are in vicinity of Army camps. The Army believes locals help the freedom fighters and by moving them near the camps they will be more able to surveil them. The other objective is to force the locals to cast votes in upcoming elections. These forceful evictions have been carried out in many mountainous areas of Kolwah, Jhao, Mashkay, Gichk and Raghay. If the locals refuse the orders, they are forced by tactics like intentional contamination of drinking water’, he replied.

He added: ‘there is another very sensitive and serious aspect of this whole dilemma. The area is very close to a Pakistani nuclear missile testing site. Recently they have been trying to extend this site and therefore are forcing people to abandon their villages.’

Though this may sound unbelievable in many parts of the world but in Pakistan the military has occupied even the lands of farmers in Pakistan’s power epicentre, the province of Punjab. Farmers who protested against this ‘injustice’ have been jailed on false cases. If this could happen in urban Punjab, then it is very possible in far-flung parts of Balochistan, where there is complete blackout of impartial and objective media.

In last few years, intentional contamination or poising of water has been reported several times in Balochistan. After every military operation, Pakistani forces poison the water in mountainous areas to make the conditions worse for Baloch armed groups. These groups then move out to new areas. But the civilians and their livestocks, who use the same sources of water, die due to the poisoned water.

Whatever the reason is, but the reality is that the people of Tadanch are dying and they have been left to die. Absence of access to clean drinking water is not the only reason. The military and political factors are also at play in the background.