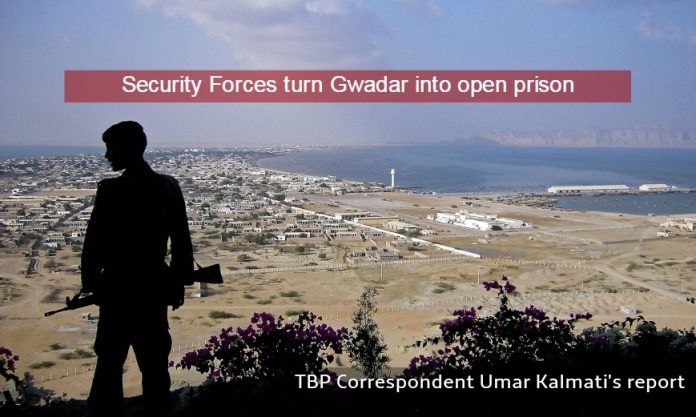 Gwadar has been turned into a prison for locals under the pretense of improved security measures, our correspondent Umar Kalmati from Gwadar reports.

Chinese funded multi-billion dollar project China Pakistani Economic Corridor (CPEC) was sold as the ticket to a prosperous and extraordinary future for the locals. However, it has turned into anything but key to a better future. Now under the charade of improving security measures the lives of locals have turned into those of prisoners living in an open prison. Pakistani security forces, whose personnel mostly come from outside Balochistan, have made it a routine to disrespect and abuse the locals on daily basis.

The Balochistan Post’s correspondent, Umar Kalmati, spoke to locals from different areas of Gwadar to get a glimpse of their daily lives. He was told that Pakistani mainstream media shows lots of development happening in Gwadar due to CPEC. Whereas, the truth is that neither there are health and educational facilities available nor any electricity or cleaning facilities are supplied to the locals.

A local told our correspondent: ‘There is improvement in conditions but only for the security forces. With each new day, a new security checkpoint is installed in the city. Foreign security personnel from Punjab and Khyber Pakhtonkhwa want to ascertain the identities of the natives every day on these checkpoints.’

Another resident told TBP that the more alarming situation is the criminal silence of political organisations of Gwadar. This is because the heads of these organisations have been provided with few petty privileges and benefits as incentive to remain quiet.