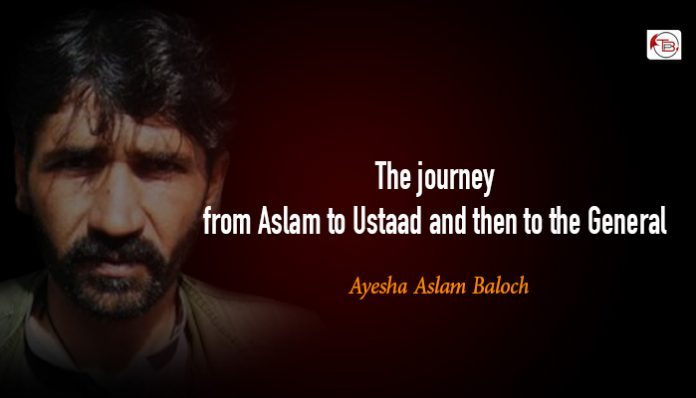 The journey from Aslam to Ustaad and then to the General

Despite being physically separated, Ustad is still with us today, and will always be with us along with his ideology. In the long journey of 25 years, ustad faced many problems & difficulties but he never disclosed these issues, because his journey was always so engaging and alluring for him.

The parents want to fulfil the wishes of their children but Ustad was a very unique character. He always used to tell us that never express a desire that goes beyond our purpose because my liability is not you and Rehan only but the whole nation & today we are not in the condition that I fulfill all of ur demands. I hope that u both will also understand your purpose.

I still remember once in childhood, I refused to have food said that I don’t want to eat this, Ustad became so displeased with me that how many children of my nation do not even have food to eat & how many of our friends are on the mountains and survive by drinking water without food for many days & sometimes they don’t even have that water. At least I don’t expect this from u people, if u don’t realise these things, than who will? Everything that he told still guides us.

Rehan & I grew up together, Rehan lived a very simple life. Every human being has some desires but few people have the ability to control these desires according to the time & circumstances Rehan was one of them. The way he spent his time with old shoes and three pairs of clothes was seen by all those who were with Rehan. Nevertheless I couldn’t believe that he would do such a great job, &
all this resulted was the guidance of Ustaad.

Ustad always advised us about the importance of time, he used to tell us that working on time is the key to success. If you work slowly and sluggishly u will regret. Time and circumstances are exactly how we want them to be. If we want peace, we will find peace. Everything that Ustaad said was precious.

If I had sat for an hour with him, he would have always talked to me only about revolutionary matters. I don’t remember ever having any private meeting with him. He loved the Baloch nation to the extent of obsession. He used to say that people who think of themselves can never be revolutionary. Think of others first and then about yourself. Always keep an eye on how our nation is going through.

Ustad Aslam was a heart patient, he also had a bypass surgery in 2010. Doctors advised him to rest, but he turned up to the mountains only a month after the surgery. We all pleaded with him to rest but he avoided saying that going to Bolan would improve my health.
I can’t explain the happiness When he returned two years later, his health was quite good. He continued his work with even more dedication.

In those days, Rehan expressed his desire, as he was so young at that time, I laughed and made fun of him. Ustaad got angry with me that if you can’t motivate anyone then u shouldn’t make fun of them. He always motivated us.

Once again Ustaad went to the mountains. This time the military operation in Bolan continued for about a year. During these operations, Ustad was badly injured. When he returned a year later, he was much weaker. Doctors called for the operation of his gallbladder. The bladder had not recovered yet that his heart problems started again, and there was not a day when he was not taken to the doctor. He used to do his work all day even when he was ill. He never prevailed his illness to dominate his work.
During the period of this ailment, Aslam’s closest friends betrayed him. That day He was in the hospital when the statement against him was made. I was shocked, it was hard for me to believe. But Ustad Aslam’s gallantry and enthusiasm took me out of this staggered atmosphere. Ustad Aslam never gave up, nor he ever disappointed. Because he knew what his aim was.

It is difficult to recount Amma and Ustaad’s gallantry after Rehan’s martyrdom. Ustad forbade us to cry for Rehan, he said if you mourn it will be unjustice with his decision and sacrifice. I wonder how such a big heart Aslam had. On the day of Rehan’s martyrdom there was an ambience of celebrations all actoss. Rehan’s sacrifice eliminated the frustrations and created a new enthusiasm. On November 30, his friends attacked the Chinese consulate and did not allow his chosen path to be marooned.

After this attack all the friends of Ustad suggested him to be careful, but he continued his work same as always he did. He used to say that we cannot hide from death, it can come anywhere & I would be lucky if I had the death of a martyr.

Within the same month, the enemy martyred Ustad Aslam.

Ustad Aslam’s wish was the death of a Martyr. Today, whether we the family or friends of Aslam or the Baloch nation, this is our duty to take forward the ideology of Ustad Aslam. Through this continuum, Ustad Aslam will always be with us. Otherwise we will lose the legacy of Ustad Aslam forever.

Ustad made the journey from Aslam Baloch to Ustad Aslam and Ustad Aslam to General Aslam with hiss commitment and sacrifices. Ustad is the name that people will remember for generations.

Ayesha Aslam Baloch is the eldest daughter of renowned Baloch revolutionary leader General Aslam Baloch, who was murdered in a suicide attack in December 2018.

Enforced Disappearances as an Issue of Governance in Balochistan – Danial Mengal

Beijing’s CPEC is the new East India Company in Balochistan