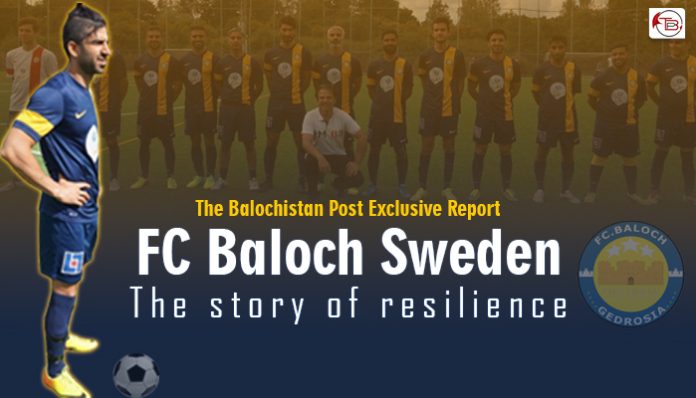 If there is a story of resilience, continuous improvement, inspiration and ingenuity then it is that of FC Baloch – Gedrosia, a football club based in Kista borough of Stockholm in Sweden.

In 2013, when some of Baloch lads from Sweden played a football match against a Baloch team of Norway they were badly defeated. But they had only lost a battle, they were to win the war.

Fast forward to 2018, the same Baloch lads from Sweden have formed a football club that is registered with Swedish Football association and are in competitive tiers of Division 6. The club is playing first match tomorrow, Wednesday 17th October 2018, in a professional knockout cup.

The Balochistan Post spoke to the management of the team to find out the journey of FC Baloch – Gedrosia.

‘The defeat in 2013 against Balochs from Norway sparked an increased engagement and we have stepped up and are more organised now,’ Seria Dadiar, a player and part of the team administration, told The Balochistan Post in an exclusive conversation.

However, the foundations were laid a year earlier in 2012 by two members of Baloch community in Sweden namely Meeran Breseeg and Atik Iranejad. They were also assisted by Ibrahim Lashkarzai. The plan was just to gather Balochs from Stockholm area and play football together on the weekends in a bid to develop the community.

This was a success. So in 2013, they invited some Balochs from Norway for a friendly match. Swedish side was defeated badly but instead of affecting the team negatively, this defeat proved to be an impetus for improvement that continues till this date.

More and more Baloch came and joined the training session with each weekend. In 2014, the group decided to establish a board and a formal meeting was called. The meeting was well attended and important decisions including joining the Korpen Leage, a recreational league, were taken. The coaches, Chairman and other administrative positions were elected.

At the same time another Baloch team was also formed in Stockholm, called FC Taftan.

In summers of 2014 FC Baloch held the first Baloch Cup, which hosted five teams including FC Taftan, Borås Baloch FC, and two Norwegian teams Baloch United Oslo and FC Azabag. FC Baloch won the derby against FC Taftan by 2-0. So far FC Baloch has the most cup victories, winning two out of total of 4 Baloch cups, held in Norway and Sweden.

“The cup has been essential in knitting together the Baloch in Stockholm and boost their engagement,” Seria told TBP.

It was in fact these cups that motivated the players and administration to enter the professional world of football and form a successful team that is now part of Swedish football league system.

In its current condition, the team is coached by Sereya Mobaraki Baloch, who is assisted by Mansoor Raisi Baloch. Both are also regular players of the team. Whereas, Bunyamin Rencber is the captain of the team.

At least 20 Baloch players are involved in the team with about 5-6 Baloch players making into the match squad in recent years. These players belong to various professions including Engineering, Law, Business Administration, Accounting, Banking, Insurance and Teaching. There are also university and school students involved with the team.

The team also has players from various other ethnic backgrounds. ‘The club welcomes anyone who is interested in helping the club to grow and prosper. The selections are based on merit and hard work on the pitch and in training sessions,’ Seria said.

When asked what message the club wants to give to Baloch youth, Seria said: “Our main message is that they should believe in themselves, and even if results are not gained immediately one should always still move forward. This will open paths and doors that are not even visible or imaginable if you stay idle. On social aspects, as of how to best cooperate to reach goals as a community it is important to be humble, positive, tolerant and to not think of the worst in people. It is also important to communicate constructively as much as possible, and give people chances to improve themselves.”

It is this positive attitude that has resulted in continuous success for the team. The club is currently categorised as a division 6 team in Swedish football league system. It played a match in qualifying rounds on 26th August 2018. The opponents were another division 6 team called Midia, which is a Kurdish team. FC Baloch won the encounter by 2-1 against the Kurdish team, taking it to the Stockholm Cup.

FC Baloch will play its first game of the Stockholm Cup, a knock out cup, tomorrow against Bollstanas SK, which is a division 4 team. TBP wishes FC Baloch the very best of luck.