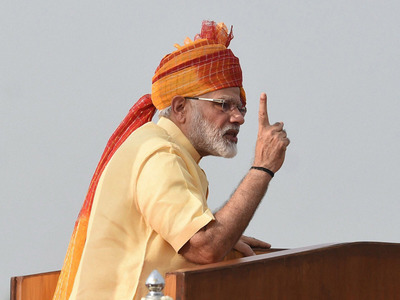 Indian Prime Minister Narendra Modi has today said the Indian government accorded priority to national security and asserted that India was capable of defending itself in all spheres.

Mr. Modi’s comments in his speech on Indian Independence Day came in the backdrop of a standoff between the troops of India and China in Dokalam.

“National security is our priority. We are capable of defending our country in all spheres,” he said from the ramparts of the Red Fort.

India was capable to take on any challenge in any frontier – land, sea or the cyber space, he added.

Modi also referred to last year’s surgical strikes on terror launch pads across the Line of Control (LoC) in Pakistan and said the world has realised the mettle of India’s security forces.

“Our Army, our bravehearts, every personnel in uniform have shown their capability and grit whenever there was a situation. Our heroes never shied away from sacrifices,” he said.

However, Mr. Modi was conciliatory towards the Muslim-majority region of Kashmir. Violent protests, which analysts believe are backed by India’s arch rival Pakistan, have erupted over the past year in Kashmir. Mr. Modi said neither “name-calling nor bullets” would be enough to pacify the region.