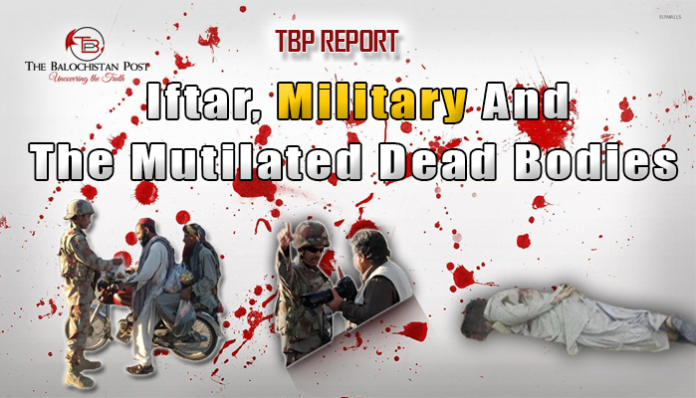 Whether it is the unstoppable streak of dumped dead bodies, the enforced disappearances or the targeted killing of Hazara community in Balochistan, the fingers have always been pointed at the Frontier Corps (FC), a Pakistani paramilitary force. Why wouldn’t they be pointed out, there are evidences which make it almost certain that their is involvement of FC in all such actions. “They have become a symbol of terror and hatred, no one’s dignity is safe from them”, said a resident of Quetta.

However, to rebuild their damaged reputation and the tarnished image, FC has initiated an ‘Iftari campaign’ during Ramadan, where they distribute a Samosa with a packet of sauce on the busy roads of Quetta for Iftar (Fast-Breaking).

But can a samosa and some sauce win the hearts of locals who have suffered a lot from the same forces.

The Balochistan Post talked with Nazeer Baloch, a Quetta based activist, about the behavior and role of FC in Balochistan and particularly in its capital Quetta. Mr. Baloch, who is now forced to live in exile because of his political activities, said that “FC personnel, since two decades have been awarded full impunity in Balochistan, they are not just involved in abductions but they would harass and humiliate any Baloch young and old in Bazar and on their check posts, which number in hundreds. They racially profile Balochs. We have witnessed many incidents where FC personnel would beat a father in front of his son, cut the mustaches of Baloch men to humiliate and degrade them… and worse is that they make people bow down in front for very minor mistakes”.

“FC is the force that picks up political and rights activists and hand them to secret agencies, their this role forced an activist like me to leave my country”, Said comrade Nazeer.

On the other hand, FC is also accused of facilitating sectarian militants to carry out attacks on Hazara Shia community in Quetta. According to Hazara residents, how is it possible for the attackers to cross hundreds of FC check posts with such ease?

Balochistan normally faces a complete a media blackout, but the killing of 5 foreigners, including a pregnant woman, by FC at one of their check posts, in 2011, was widely criticized all over the world.

Evidences against the role of FC in abductions is available in a large number, but despite of that, the paramilitary force has never faced any charges. Few years ago, a police officer produced video clips in Balochistan High Court, where FC personnel could be seen picking up two Baloch activists, who went missing after that. No action was taken against FC by the court of law.

Another video went viral on social media, where FC personnel could be seen killing hand-cuffed Baloch activists and leaving the dead bodies in the wild.

According to UNPO report, published in 2016, just in span of two days, from 11th April to 13th, FC had killed 35 Baloch activists and picked up another 200.

Based on available evidences, it could be easily established that FC is indulged in war crimes against humanity in Balochistan. Now would a Samosa with few Pakoras will contribute in improving the tarnished image of FC is yet to be seen.