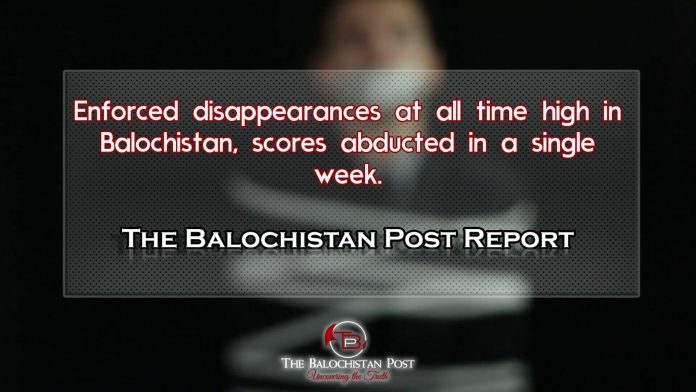 Enforced disappearances in Balochistan have reached shocking numbers. The Balochistan Post (TBP) has learnt of large number of enforced and illegal arrests. These incidents happened only over a time span of just 7 days.

Enforced disappearances that started in early 2000s have never slowed down in Balochistan, in fact dramatic surge has been observed in number of people going missing with each coming year.

In early 2000s, after murder of Justice Nawaz Marri, a series of abductions took place all over Balochistan, which has continued even after 18 years. Thousands have gone missing including women and children in last 18 years.

Thousands of mutilated bodies of missing persons have also been discovered.

UN’s Working Group on Enforced or Involuntary Disappearances visited Balochistan in 2012 and ruled out that Pakistani security forces are involved in grave human rights violations in the region.

Analysis of enforced disappearance incidents of just last week shows a very grim trend prevalent all over in Balochistan. “The impunity enjoyed by the perpetrators is awful, a Baloch activist told TBP.”

One of the most dreadful disappearances of last few days is that of Dr. Saeed Baloch, who was abducted in front of dozens of witnesses from Bolan Medical College, Quetta, the only medical college in Balochistan. Young Doctors Association (YDA) and many student organisations have strongly protested against abduction of Dr. Saeed Baloch.

On the other hand, more than half a dozen youth were abducted just from Noshki in last few days.

At least two of those abducted from Noshki are nephews of Balochistan National Party leader Senator Dr. Jahanzeb Baloch.

Dr. Jahanzeb Baloch is a member of Pakistan’s highest legislative body, Senate. An Analyst talking to TBP said that if a Senator’s family is not safe then how can the ordinary people expect to live in a safe environment?

Additionally, from Tump town in Balochistan, Azeem s/o Imam Baksh, whereas, from Nehang, two men identified as Baba and Akram were arrested by Pakistani forces. According to information received by TBP, Baba and Akram are Gulf expatriates who were in the town on Holidays.

Two other persons identified as Sagheer and Jaleel also went missing from Tump.

In Panjgur, another town of Balochistan, Pakistani security forces aided with local collaborators raided Government High School Tasp and arrested Anees s/o Abdul Khaliq. Anees, a student in the school, was in an examination hall when he was taken away.

A 13 year old boy was arrested by Pakistani security forces during last week’s state organised Makuran festival. The boy was identified as son of Mohammad Ameen.

Pakistani security forces also confirmed to the media that they have taken into custody at least six persons from Mastung. They, however, did not disclose the names of the arrested.

From a market in Parom Panjgur, a person named Dr. Akhktar s/o Hammal was also arrested by Pakistani security forces.

In another incident, a person named Niaz s/o Abdullah was summoned to an Army camp in Geshkor, Awaran. Niaz has since not been heard of. The family and the locals believe he has been arrested and disappeared by Pakistani security forces.

Last night, in another raid in Hoshaap, Personnel of Pakistani security forces took away Samad s/o Ali. TBP has received reports that other family members were also maltreated during this raid.

In another incident yesterday, two men identified as Ali Baksh s/o Qadir Baksh and Evaz s/o Malang were arrested by Pakistani security forces. Both of them work as transporters.

The above details are only those where TBP could get information about the incidents. In Balochistan, it is very hard to gather information from far-flung and remote areas. Additionally, it has been found in many cases that the family members refrain from reporting such incidents to Media due to threats from the perpetrators.