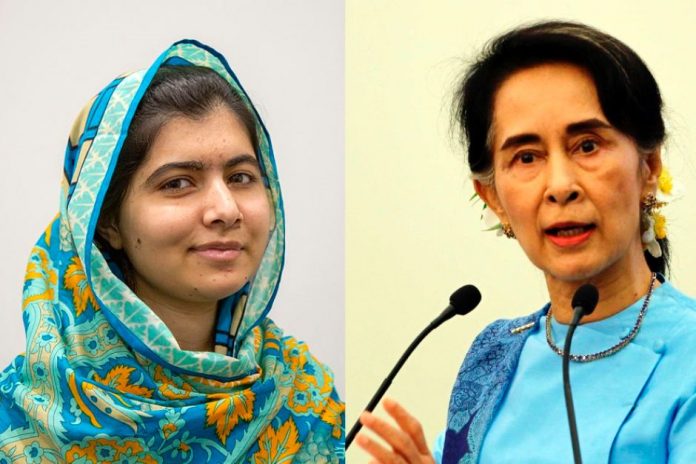 There is no doubt in the fact that Rohingya minority in Myanmar is facing one of the worst ethnic cleansing of modern times. It is also absolutely necessary that all human rights defenders and champions of free & civilized world should not only raise their voice against the atrocities Rohingya people are facing, but they should also play their role in stopping those heinous crimes against humanity.

There is a problem with the so-called award winning champions of human rights though, the problem which raises many fingers and questions on their very humanity, let alone being champions of any kind.

The best example in this context is none other than the de-facto leader of Myanmar itself, the Nobel Peace Prize Laureate Aung Sang Suu Kyi. She was awarded with the most dignified title for her services and sacrifices for democracy, political freedoms and rights.

However, she has been criminally silent on the barbarities by her state against the minority Rohingyas. When asked about the Rohingya ethnic cleansing in her media interviews, she completely denies the fact that there is any ethnic cleansing going on in her country, using terms like “lot of hostility” and “Muslims killing muslims”.

This might remind you about the Pakistani rhetoric about Balochistan and specially about the missing persons issue. They use same excuses to evade criticism and create further confusion about the genocide taking place in Balochistan.

For example they say “there is no missing persons in Balochistan, people just go in foreign countries and claim to be missing” and “the mutilated dead bodies are as a result of inter-and intra-tribal conflicts in Balochistan.”

You may find Aung San Suu Kyi talking about and condemning a lot of issues around the world but she fails to even acknowledge the sufferings of minorities in her own country, let alone condemning the actions of perpetrators. This makes her an absolute hypocrite and she has rightly faced worldwide criticism for her hypocrisy.

Unfortunately, she is not alone and there is quite a long list of such “Peace Prize” winning hypocrites. Malala Yousafzai is a latest addition in the list. You might be surprised, some of you might even be angry, for calling her a hypocrite because ‘after all she is just a school going child who was shot in head for demanding education for girls.’

Let us apply the same standards we used for calling Aung San Suu Kyi a hypocrite. Suu Kyi is a hypocrite because she can lecture you on all the issues concerning democracy, peace and human rights around the globe but will not utter the words “ethnic cleansing” for Rohingyas because her own country is responsible for it.

Similarly, you will never find Malala talking about the crimes against humanity committed by her own country Pakistan. Pakistan is world-famous for persecuting religious and ethnic minorities. The state even set the standards for who is a Muslim and who isn’t in its constitution. Hindu, Christians, Ahmadis, Shias and other religious minorities face worst forms of state and state-sponsored atrocities.

There is a systematic genocide going on by the Pakistani Army and secret agencies in Balochistan. The indigenous Baloch people are facing terrible crimes against humanity for demanding their basic human rights.

Pakistani forces attack, loot and destroy entire villages using gunship helicopters almost every day in Balochistan. People are forced to migrate from their ancestral lands to live in open sky as IDPs or refugees in neighboring countries. Political activists, students, teachers and lawyers become the primary victims of what Amnesty International and Human Rights Watch called “Kill and Dump policy” by the Pakistan Army.

Enforced disappearances, arbitrary detentions, torture and killings have become part of life of the people of Balochistan. Thousands have become “missing persons” and their families continue to go through the worst agonies in search of their loved ones outside press clubs, courts, offices of state authorities and on roads demanding their release.

Most of the times the struggle of those Baloch families end at the recovery of bullet-riddled dead body of their ‘missing’ loved one. Have you ever heard Malala speak about these families ever?

Is it because she doesn’t know of these families? No, because she can’t be unaware of the people of Balochistan when she is aware of the Rohingyas and always worried about children in Africa who can’t go to school.

Of course she should highlight those issues but what makes her a hypocrite, like Aung Sang Suu Kyi, is her silence on the crimes committed by her own country while she becomes champion talking about other countries.

Malala once expressed her wish joining politics after finishing her studies and becoming the Prime Minister of Pakistan. Nobody should have a problem with that but all I want to say to her now is this:

Dear Malala, before you express the feelings of your ‘broken heart’ on Rohingya crises to your fellow Nobel Peace Prize Laureate Aung Sang Suu Kyi and call on her to condemn the atrocities against Rohingyas, just know that you are talking to your future self.

The only difference between you and Suu Kyi is that she is part of a government which commits human rights abuses while you are aspiring to become PM of a country that does the same if not worse. So before you lecture Suu Kyi, just know that you are talking in front of a mirror.