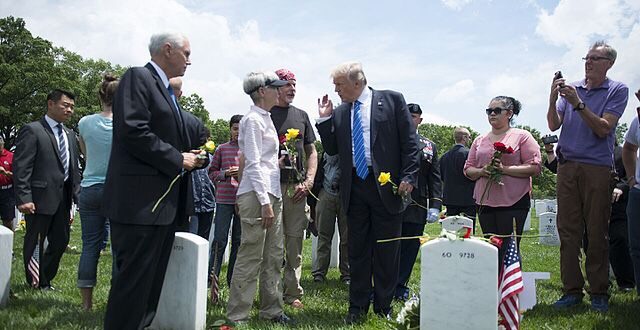 Come hell or Blackwater, nothing is about to change — unless…

About a month ago, President Trump met with his national security team — Defense Secretary James Mattis, Secretary of State Rex Tillerson, and National Security Advisor Lt. Gen. H. R. McMaster — to review their proposed strategy for the war in Afghanistan. Trump rejected it, heatedly, because it proposed continuation of what we’ve been doing for nearly sixteen years.

On Friday, Trump met with them again. This time, Vice President Mike Pence was in attendance as well. Trump hinted that they had reached some sort of agreement. What it is, he didn’t say.

In between those meetings Erik Prince, former head of Blackwater, the high-end training and security force company that had extensive service in Iraq, was marketing a plan. It called for an end to U.S. troop presence but substituted a new mercenary force of about five thousand men — presumably the former special forces troops that had made up Prince’s Iraq force — as well as a private air force contingent of about one hundred aircraft, all under the control of a “viceroy” that would operate against Taliban and other terrorist forces in Afghanistan.

A similar plan is being marketed to the administration by investor Stephen Feinberg. A third similar option is, according to a source in the Afghanistan/Pakistan region, being offered by Prince Ali Seraj, a member of what was Afghanistan’s royal family, who fled when the Soviets arrived in 1979.

Also, according to my source, Seraj is actively seeking face-to-face meetings with Trump or high-ranking people on his national security team. Seraj wants to offer a force of Afghan tribal fighters (which will never be more effective than the Afghan army, which is to say minimally at best).

Prince’s plan was disparaged by almost everyone in government. Afghanistan commander Gen. John Nicholson, reportedly refused to even meet with Prince.

Gen. Nicholson had asked for about five thousand more troops for a mini-surge in Afghanistan to ensure security. Also pushing for more troops were Stephen Hadley, formerly national security advisor to president George W. Bush and evidently the Washington Post.

A Post editorial stated that we couldn’t withdraw from Afghanistan. “The point,” it said, “is to show the Taliban that it can’t topple the central government, and coax the Taliban, if possible, toward negotiations. Maybe the Taliban will not agree, but a continued U.S. effort is preferable to Afghanistan falling apart.”

It is impossible to misstate our goals in Afghanistan more perfectly.

Since 2001, we have fought the Taliban to stabilize Afghanistan, not to defeat it. We have failed. The Taliban control at least ten percent of the country and the rest — aside for the areas in which U.S. and coalition troops are present at the moment, is up for grabs. Taliban attacks on U.S. and coalition forces, as well as civilian targets, have increased about twenty percent in the past year.

The Afghan government under Ashraf Ghani is about as riddled with corruption as that of his predecessor, Mohammed Karzai. Efforts to establish security wax and wane as does the effectiveness of Afghani forces.

ISIS has a large presence in Afghanistan. When the Air Force dropped the “mother of all bombs” against a target in Afghanistan in April, it destroyed a big ISIS camp dug into caves.

Many of the problems we face in Afghanistan have been the same since before the British withdrew in 1842 after their first Afghan War. The society, such as it is, remains tribal. The Soviets invaded in 1979 to support their puppet government and withdrew in 1989 having learned that they couldn’t defeat the mujahedeen, the pre-Taliban Islamic forces that they encountered almost everywhere. (The mujahedeen were helped enormously by U.S. money and munitions which allowed them to pay fighters and shoot down Soviet helicopters and fixed-wing aircraft.)

The mujahedeen, like the Taliban, were also aided substantially by their co-religionists in Pakistan. Pakistan, though formally our ally, has undermined our efforts at every turn. They hid Osama bin Laden for years until the CIA found him in Abbottabad and the SEALs flew in to kill him, a mission that wasn’t disclosed to the Pakistanis until it was almost over.

Pakistan’s Inter-Service Intelligence agency (ISI) has enabled the Taliban to operate freely. In addition, ISI is also supporting, and giving safe haven, to terrorist networks such as Laskar e-Taiba (which conducted the massive Mumbai terrorist attack in India in 2008) and Jamaat ud Dawa (JuD). Both are designated terrorist groups by the U.S.

A source in the Afghanistan/Pakistan area has informed me about some of what ISI is doing in Afghanistan.

One example he points out is a massive terrorist training camp in Pakistan’s Balochistan province in Koh i Sabz (“green mountain”) outside the city of Panjgur. He theorizes that it is either Saudi-funded or supported as a Pakistani proxy group.

Another example is a man named Muneer Mullazai. He is, according to the source, a high-ranking and key ISI asset in Afghanistan. He lives in three locations in Afghanistan and Pakistan, one in Quetta City in Pakistan, from which the infamous Taliban “Quetta shura” has operated for many years. My source says that Muneer works closely with ISI and is always guarded by armed men. He publishes and oversees distribution in Afghanistan of an Islamist pamphlet called “the Jarrar,” and one of his associates, “Saifullah,” runs media accounts in Afghanistan for JuD.

It’s reasonable to conclude that the biggest problem in Afghanistan is Pakistan. It’s also reasonable, and essential, to conclude that the reason Pakistan is doing so is its adherence to the Salafist Islamic jihadi ideology, which brings us to the point that many faithful readers have come to expect from this column.

The reason we cannot defeat the Taliban is twofold: first, we have never defeated their ideology, and second, nuclear-armed Pakistan has supported our enemies — Taliban, LeT, JuD, al-Qaeda and the rest — while still pretending to be our ally.

Whatever the president decides, if he fails to engage and defeat the Islamist ideology we will lose the war. If he fails to deal decisively with Pakistan, we cannot defeat the terrorist networks it sponsors.

McMaster will never allow the ideological war crucial to winning this or any other anti-Islamic terrorist conflict to begin despite the president’s promise to do so. McMaster has, for years, insisted that terrorism is “un-Islamic.” While he is on Trump’s team we cannot deal with either the Islamist ideology or Pakistan.

Our ground and air forces have done all that we have asked of them except to defeat the Taliban. It is time to pull them out and leave a residual force — either a US/NATO force or one of the mercenary forces — that is aimed solely at accomplishing the only goal we ever had: to defend American interests in Afghanistan.

Though it is remotely possible that a mercenary force could do as well as a US/NATO force, it is vastly more desirable to have any residual force under an American (or NATO) commander than any profit-seeking “viceroy.”

Those interests are exclusively to prevent Afghanistan from returning to its pre-9/11 status as a central safe haven for terrorists wishing fervently to attack American people and assets both here and abroad.

Unless and until we defeat the Salafist-Islamist ideology, the war in Afghanistan will go on indefinitely until we withdraw altogether. Then, Afghanistan will return to its pre-9/11 form. If the president chooses any of the options he has — withdrawal, a residual U.S. force aimed at terrorist suppression, or one of the three mercenary army proposals — he will do no more than continue to play “whack-a-mole” in Afghanistan for the remainder of his presidency.

And we will continue to spend lives and treasure in indefinite amounts for the rest of our national existence.