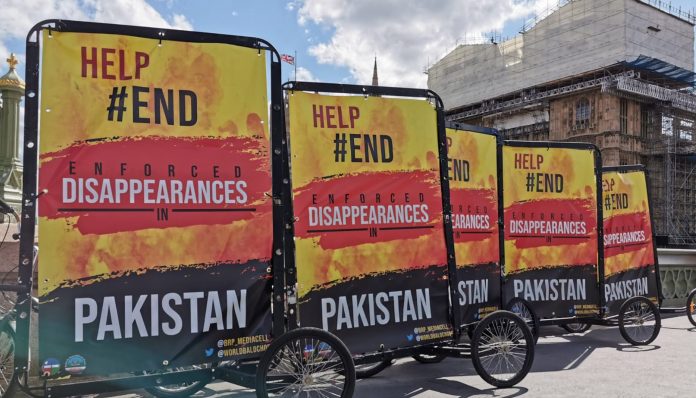 The World Baloch Organisation and the Baloch Republican party have jointly launched a human rights awareness campaign in the city of London.

“The campaign hopes to highlight the dire human rights situation in Pakistan, particularly the human rights abuses faced by the ethnic Baloch ,Sindhi, Pashtun, Mohajir and religious minorities in the country,” the political parties behind the campaign stated.

“The campaign will focus on the issue of Enforced Disappearances in Pakistan, where thousands have been forcibly disappeared by Pakistan’s military and its intelligence agencies. Most are extra-judicially killed and their bodies dumped on roadsides bearing signs of extreme torture, others stay missing forever, Amnesty International has called it the “Kill and dump” policy. Victims include activists, teachers, students, doctors, intellectuals and journalists who have voiced their opinions against the military’s iron grip over the country. The military’s control over the local media is such that anyone reporting such incidents risks falling victim themselves. International NGO’s and Journalists are not given access to Balochistan where most of the cases of disappearances have been registered,” read the statement by the two parties.

In the first phase of the campaign, advertisement bikes were seen riding all around London’s city centre carrying banners that read “Help end enforced disappearances in Pakistan”. Bhawal Mengal, a representative of the WBO said “ The ads look to bring the attentions of Londoners and foreign tourists towards the dire situation, we hope the International community stands up for our rights and pressures the Pakistani establishment into putting an end to the inhumane practice,” the president of the BRP said, “We have no choice but to raise our voices at international forums regarding the situation, activists that have tried to speak up for their rights in Balochistan have either been killed or disappeared, it is up to the international community to decide if they want to stay silent over the killings of innocents on a daily basis or speak up and end this carnage”.

Pakistan’s establishment has been long criticized over its practice of enforced disappearances and extra judicial killings by International bodies and local human rights organisations that dare to speak out on the issue.

Kech: Women protest against forced labor by the army on Goldsmid’s line

Gichk has been turned into a Nazi concentration camp – BNM