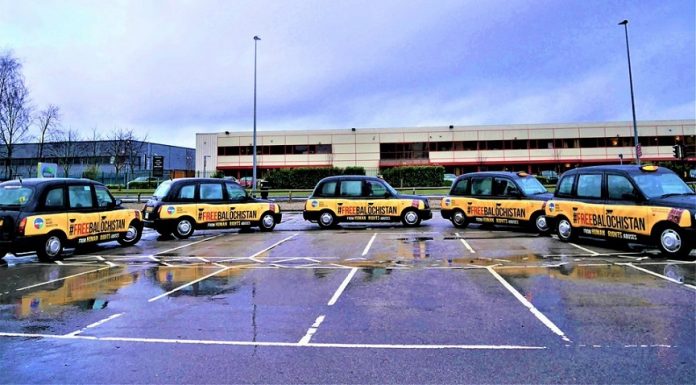 The World Baloch Organisation (WBO) on Friday relaunched its #FreeBalochistan human rights campaign on black taxis in London and elsewhere in the United Kingdom.

The Pakistan military has been involved in gross human rights violations, including enforced disappearances, extra-judicial killings and torture.

This comes two months after the Government of Pakistan demanded that the UK government and Transport for London remove “#FreeBalochistan” and “Stop Enforced disappearances” adverts from UK taxis.

In response to Pakistan’s request, the Transport for London ordered the adverts to be removed from taxis within 24 hours, on the grounds that they violated its advertising policy. The WBO maintained that it had not violated any policy and vowed to challenge the decision.

The WBO has also been running an advertising campaign in New York City, where several billboards at the iconic Times Square, displayed similar slogans during the New Year’s Eve celebrations.

The billboards gained attention from the international media and millions watching the event from around the world.