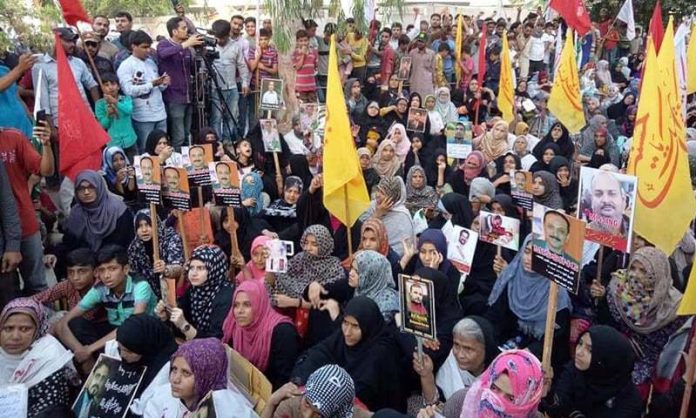 The police arrested 36 relatives of ‘missing persons’ from outside the residence of President Arif Alvi in Karachi city of Pakistan on Wednesday after a First Information Report (FRI) was filed on behalf of the state against the organisers of the sit-in, Pakistan Today reported.

Since April 28, the relatives of the missing persons had been protesting outside the president’s residence on Fatima Jinnah Road but on Wednesday the police registered an FIR against 250-300 unknown persons and five nominated persons over charges of riots and waging war against Pakistan.

The police have invoked several sections of the Pakistan Penal Code (PPC) against the protesters, including 147 (punishment for rioting), 148 (rioting, armed with deadly weapon), 120-B (punishment of criminal conspiracy), 121 (waging or attempting to wage war or abetting the waging of war against Pakistan), 121-A (conspiracy to commit offences punishable by Section 121), 341 (punishment for wrongful restraint), 427 (mischief) and 503 (criminal intimidation), reported Today.

Soon after registration of FIR, the police launched a crackdown against the protesters and arrested 36 people, including organizer Hasan Raza.

Missing Persons’ Relative Committee head Rashid Rizvi said that they will not back down by these ‘high-handed tactics’ and would continue their protest until their loved ones are recovered.

Speaking to a local news outlet, a senior police official admitted that the police had ‘detained’ several persons who were nominated in the FIR. He added that force had not been used against the protesters and the police may release some of them after an inquiry, PT reported.

The term ‘missing persons’ is also widely used in Balochistan to connote arrests made by security forces as the arrested are not presented before a court of law but are instead kept in military camps.

According to the rights activists, ‘Missing Persons’ issue is not limited to nationalists or to one province, such abductions have become Pakistan’s secret agencies’ favourite tactic to suppress dissent, and hunt possible spies.