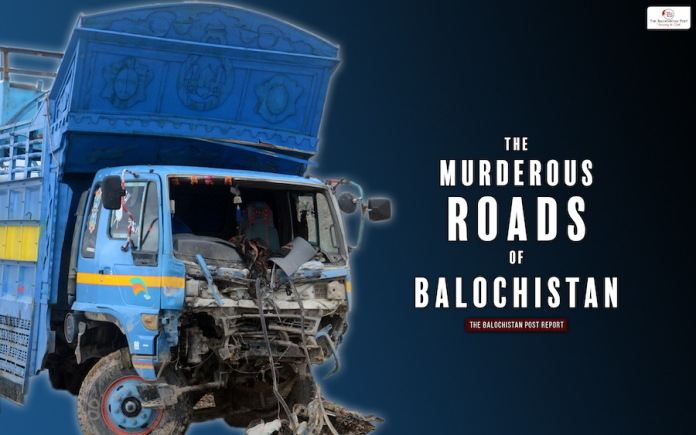 The next day Sami had his flight booked for Dubai. He dreaded flying back to the scorching heat of Dubai, his workplace where he had been a low-paid labourer for nearly a decade now. He was a family man by all means and never liked being away from the family. Sami Mengal, in his mid-thirties with thick moustaches and tall physique, had aged before his years. The enormous burden of not only providing for his five young children but also for his siblings, who were orphaned at an young age, had smothered his life. One of his sisters also suffers from cancer and Sami was the only source of income to pay the bills of her expensive treatment.

On the tragic day of 26th April 2019, Sami was travelling in a car with four friends from Quetta to Noshki when the disaster struck. On the deadly stretch of Sultan Charai, their 1986 model white Corolla car collided head-on with a passenger bus operated by transport company Al-Imdad. Sami died on the spot, leaving behind a family who had lost their sole bread earner. Sami is just one figure, a number plucked from thousands that die on the roads of Balochistan every year.

According to government’s own records more than two persons get killed or injured in road accidents in Balochistan every day. The real number is much higher as according to TBP’s own records, compiled through its news desk, multiple road mishaps with multiple fatalities are reported on daily basis. The reported accidents in Balochistan amount for nearly 2.5% road fatalities of the whole world, almost twice the average of per capita fatalities in the world. The unreported accidents are at much higher numbers.

These staggering fatalities, which have increased with each year, would suggest an emergency preventive response by authorities, but the reality is otherwise as nothing has improved, at least not in last fifteen years.

There are multiple reasons for the road accidents in Balochistan.

The dilapidated condition of roads that are decades old are the main reason of such mishaps in Balochistan. The roads were built decades ago for few vehicles. The population has since increased manifolds, but these roads have almost never been upgraded. The 813km long N-25 highway, also known as the RCD highway, is the major carriageway in Balochistan. This road was built more than 30 years ago for small traffic. It now caters for thousands of heavy vehicles every day, and therefore is one of the most dangerous roads of Balochistan.

Majority of highways in Balochistan are dual carriageways, which are very narrow with no divider between both lanes. Such roads are one of the major contributors of road accidents in Balochistan.

The road safety and navigation signages are non-existent. The international standards are not followed, and local standards have never been devised. According to government’s own sources, there is virtually not a single traffic engineer in Balochistan.

The government’s involvement in freight transportation management is zero percent. The overloading of freight vehicles, majority of which are not fit to be driven on roads are great danger to road users. Passenger buses are also used to transport goods. Often along with passengers, hundreds of barrels of fuel are transported on roofs of buses. This has resulted in numerous burn to death accidents as at various instances small sparks have lightened the combustible fuel in such buses.

Similarly, slope curves on roads are either not present or are of very substandard nature. Road repair or extension works are lengthy and proper warning signage or adequate lighting is not provided in almost all instances.

The commercial growth around highways is also not regulated, and shops are built very close to the highways resulting in congestion and pedestrian accidents. Such accidents form the major part of the numbers in road causalities.

Security Forces, particularly Frontier Corps, construct speed breakers at their will at any roads or highways under the pretext of security. No standard dimensions are followed, and therefore scores of accidents happen solely due to this reason.

The mechanism to issue driving licenses in Balochistan is totally flawed. There is literally no training given to drivers, and driving tests are never conducted. To test the system, a TBP reporter, while residing in Karachi, managed to get a driving licence from Kalat district by only paying 5000 PKR ($32 US Dollars). He never had to visit Kalat, his licence was issued without him being present.

Road awareness and education is not promoted in Balochistan. It is estimated that 90 percent of truck drivers use intoxicants while driving for long hours. Such trucks have killed scores in Balochistan.

Despite such dangerous roads with high number of accidents, emergency facilities are not available. Proper healthcare facilities for emergency medical aid are completely absent on highways. Victims have to be transported hundreds of kilometres away to major towns and many do not survive the long journeys.

The most disturbing issue is government’s refusal to acknowledge road accidents as a grave issue with a need for an urgent solution. Deaths resulting from road crashes are termed as natural deaths and no follow-ups are carried out.