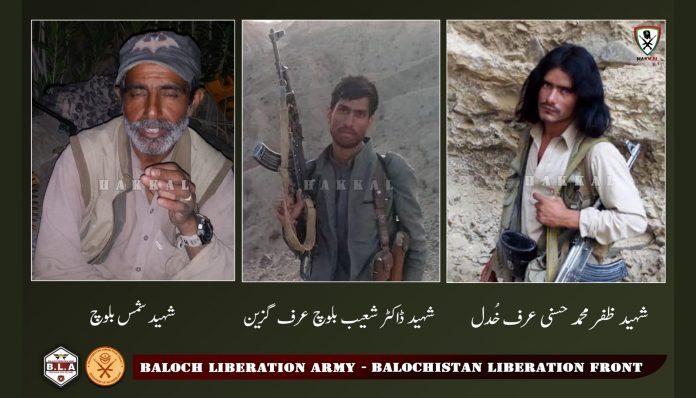 Three fighters killed in a combat with Pakistan army and its death squad in Kalat area of Balochistan on Thursday, BLA confirms.

According to details received by The Balochistan Post, Baloch Liberation Army (BLA), a pro freedom militant organization has released a statement on Friday, saying that three Baloch freedom fighters were killed in combat with a death squad which runs under the supervision of Qambar Khan and Pakistan army.

Qambar Khan is a local tribal chief in Parod area of Kalat, and son of a known Baloch freedom fighter, late Lawang Khan, who was killed by Pakistani army in 70’s insurgency of Balochistan.

As per the locals and pro freedom organizations, Qambar Khan is now working for Pakistan army and he has created a death squad in the area to fight against Baloch freedom fighters. Few skirmishes between BLA fighters and Qambar’s death squad had been reported in the past as well.

“Pakistan army is regulating religious extremist terror groups in Kalat and surrounding areas through Qambar Khan and Home minister Zia Langov. These groups have been activated against Baloch freedom fighters”, he added.

“BLA has not carried out massive attacks on these death squads in the past to avoid civilian casualties. BLA now warns the locals to keep distance from those terrorist groups since we will hit them hard”, Jeeyand Baloch said.