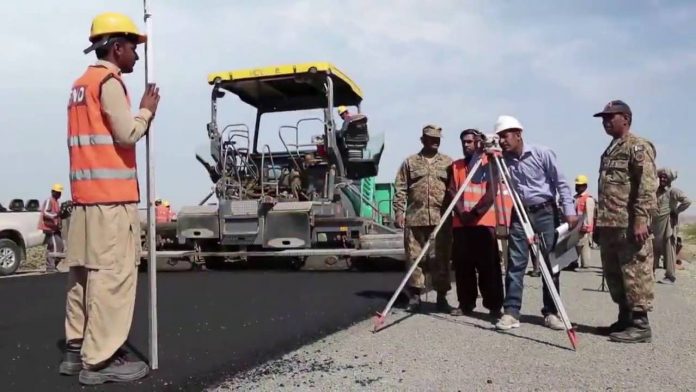 FWO workers were attacked on CPEC route in Kech district of Balochistan on Wednesday.

According to details received by The Balochistan Post, Frontier Works Organization (FWO) personnel were attacked in Meer-Abad area of Turbat. Where they are working on a CPEC link road from Turabt to Mand.

The Frontier Works Organization (FWO) is a military engineering organization, and one of the major science and technology commands of the Pakistan Army. FWO is currently undertaking construction of 870 km of the following roads in Balochistan as part of the Western Route of the China Pakistan Economic Corridor (CPEC) to operationalize Gwadar Deep Sea Port by enhancing its connectivity.

Beebagr Baloch, spokesperson for BRA said, “BRA fighters attacked the vehicle of FWO personnel on Wednesday morning while they were going to work on the CPEC route from Turbat to Mand. The attack resulted in killing 2 personnel and injuring several.”

Beebagr Baloch has warned the local constructors to avoid working on CPEC projects otherwise they will be responsible for the loss of their machinery.

BRA spokesman further said, “We want to make it clear to Pakistan and China that their all oppressive projects including CPEC are not acceptable in Balochistan without the consent of Baloch people. And we will continue our attacks until the independence of Balochistan.

Different Baloch militant groups in past had attacked FWO, CPEC projects and Chinese Engineers in the region.

Insurgency in Balochistan is believed to be a major threat to multi-billion projects between China and Pakistan. To meet this challenge head on, a special division of Pakistan Army has been created to ensure the security of the projects and Chinese nationals.

In another news, Pakistani forces were attacked in Awaran district of Balochistan today, on Wednesday.

Responsibility of the attack on forces has been claimed by another Baloch militant group, United Baloch Army UBA.

MUreed Baloch, spokesperson for UBA has claimed to attack a Pakistani forces checkpoint with heavy weaponry which resulted in killing 4 and injuring several forces personnel.