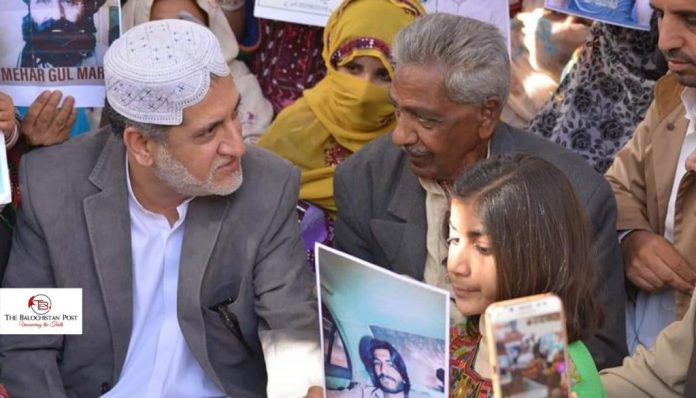 According to the TBP correspondent, Akhtar Mengal, after returning to Balochistan from a month-long stay abroad, visited the camp set-up for Baloch Missing Persons in front of Quetta Press Club.

Akhtar Mengal termed the protest a slap on the face of government, as they had failed to address the issue of Missing Persons after assuming the office three months ago in August.

“If they can feel it, it is a slap on the face of Federal and Provincial government; sadly, humanity has died long ago, especially in Balochistan”, said Mr Mengal

“These women are not protesting for any kind of treasures or privileges; nor do they want to take over the government, but they are here for their loved ones, and if you cannot see it, you have no right to run the government anymore”, added Mr Mengal

He complained that if courts could not serve justice, then they should lock-down the lavish buildings built for the purpose.

“If they really want to solve the Balochistan-issue, they do not need not to build us dams or roads; the issue is political and it can only resolve once the missing persons are released”, further added Mr Mengal

He revealed that in a deal with the Federal government, they were promised to release all missing persons within a year, but they would continue to raise their voice for missing persons and not wait for a year.