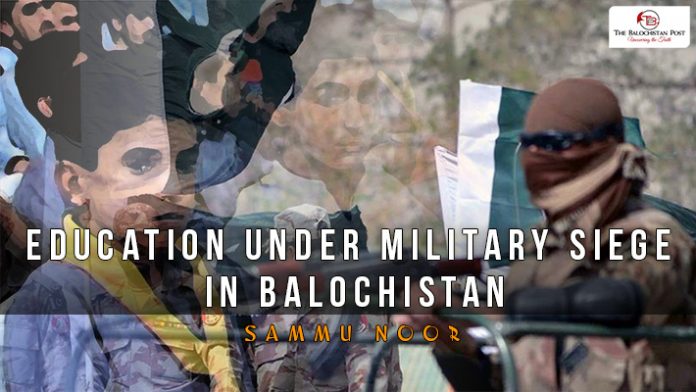 Education Under Military Siege in Balochistan

The government statistics about the education in Balochistan claim the percentage of literacy at 43 percent which, in fact, does not depict the ground reality, and this figure contrasts to the facts, which is far worse than the given data. On other hand, the report of Pakistan Education Statistic 2015-16 launched by the National Education Management Information System (NEMIS) states that 70 percent children in Balochistan are out of school. Just imagine it, this is just the government statistics.

The nature of colonial states’ policies are always anti-education where they do not let their colonies to access right to education, and we see the same policy executed by Pakistan, which keeps the Baloch nation at distance to education. Because Pakistan knows that education leads towards awareness about Baloch rights and national issues.

To keep Baloch at a distance to education, the state uses multi-layer tactics in order to close the door to education for Baloch nation.

In the perspective of Balochistan as the part of Pakistani federation, firstly, if we analyze the literacy rate of Balochistan based on the above mentioned definition of UNESCO, then according to the ground realities, we find it 15 to 20 percent hardly. On the other hand, the Pakistani survey reveals that Balochistan has the literacy rate of 43 percent which interestingly includes ones who can write only; which is not compatible to the UNESCO’s definition of literacy.

Balochistan is richer than the other provinces in terms of natural resources and geography. Therefore, the income per individual and literacy rate should be comparatively higher than provinces, but unfortunately it’s not so. Balochistan has the lowest literacy rate.

Secondly, if we analyse the condition of Balochistan as an occupied territory in terms of education only, then the occupier state becomes responsible for the basic rights of the occupied country in accordance with international law, among which education is one of basic and most essential rights of human being.

If Balochistan would not be even enriched with natural resources, but it naturally becomes the responsibility of a state to facilitate its every citizen with the basic rights of life, because every individual pays tax to the state from their personal income and state is receiving it using different means of income tax payment from people.

In the above mentioned both cases, the people of Balochistan are deprived of their basic rights. On the other hand, Balochistan plays a vital role for boosting the economy of Pakistan, but Balochistan itself is deprived of everything.

According the Joint Survey Conducted by United Nation Children Emergency Fund (UNICEF) and Global Partnership for Education (GPE) in Balochistan, 25 percent of the government schools are without buildings, 64 percent are without potable water and 90 percent of schools has no proper sanitation system.

According to a survey of Balochistan government, Balochistan has collectively 11,000 educational institutions, among them six are universities.

According to UNESECO, Balochistan have 11,079 primary schools and 913 higher secondary schools. UNESCO report reveals that five hundred schools have no science rooms and majority of schools are lack of laboratories, and 80 percent schools lack basic facilities such as potable water, boundaries, drainage and electricity.

It is not a rocket science to understand the impossibility of how one teacher can teach six different classes just in a single room? Two thousand schools are without classrooms, it means that students are studying in the open sky, and 1.7 million children are out of school, while 80% of the students are not even able to reach matriculation stages. In addition three thousand ghost schools and five thousand ghost teachers are getting expenditure from Balochistan budget.

Recently many notifications of threat alerts were issued by the government which points out that educational institutions are the most vulnerable of such threats, but these are just tactics for creating an atmosphere of fear and to justify the presence of forces in educational institutions. In Balochistan, the real threats to peace are the Pakistani security forces themselves.

In University of Balochistan (UOB), programs were conducted last year in the honour of Nasir Khan Janjua, the then commandant of frontier crops, but the fact is, under his command thousands of Baloch youth were either abducted or martyred. Even to date, in university colony, the guest house of university’s vice chancellor is used as FC headquarters, and the Sport Complex of UOB has been handed over to Chiltan Rifles Wing of FC.

Auditorium of university is established for students, but students are strictly prohibited to enter it, and surrounding areas are captured by FC in university where they have secret detention centre used for violence and torture of students. All students, teachers and residents of university colony are witness of these facts but they are silent for the sake of their lives.

Power is used in Balochistan to suppress the voice of peaceful politics. Every student has the fear of being abducted in university. In the name of security, thousands of cameras are installed in university premises, and in spite of it, hostels are frequently searched and students are harassed by the forces.

This is not only story of Balochistan University; every educational institution in Balochistan depicts the same state of affairs. The building and administration of Balochistan University of Management and Technology Chiltan Campus has been occupied by the frontier crops, and operations in nearby areas are controlled by FC-64-Wing under the military camps present inside the premises of university.

Same situation exists in Sardar Bahadur khan Women University (SBKWU), the only university for women. A bus of SBKWU carrying students was targeted on June 15, 2013 by the Islamic extremists. The forces used the attack to justify their presence in the women university, and after the attack, the university was converted into a military camp where students are humiliated on daily basis by the security forces.

According to Education Department of Balochistan government, there are 97 degree colleges in Balochistan. The intermediate and degree colleges of Mashkay, Nall, Awaran, Lehri and Turbat are occupied by the forces. The only inter-college of Mashkay, a tehseel of Awaran district, has been occupied by the state forces since October 2013, and the hostel of Degree College Panjgur was converted into a FC camp by the forces.

During raid on hostel of Atta Shad Degree College Turbat, forces abducted Rasool Jan along with other students and detained the books of history, philosophy and politics, and after that, in front of the media, forces claimed to capture a huge amount of pro-independence literature. Even though, those books are available in markets of Lahore and Karachi. Other all abductees were set free, but the mutilated body of Rasool Jan was found on April 13. After the raid, forces shut down the hostel of Atta Shad Degree College which affected the education of thousands of students.

Bolan Medical College (BMC) is the only medical college in Balochistan, and it has a large number of security presence. The security forces have captured the sports complex of the hostel and indoor games complex. Students of BMC are much concerned about the presence of forces in institution, because educational institutions are not venues for the forces to stay, and their presence only disturbs the educational environment of BMC.

For giving justification for the presence of forces in institutions, state can go to any level. School and colleges are attacked through Islamic extremists so that forces get solid reasons for the occupation of the institutions. Currently, all educational institutions including universities and colleges are dealt directly or indirectly by the forces.

Fate of the Baloch is in the hand of Pakistani rulers, and it’s up to them where they take it. History is witness that Pakistani rulers have always wanted to deprive Baloch politically, socially and economically. If Baloch don’t get the ownership of its land, fate of people will remain same or might be worst.