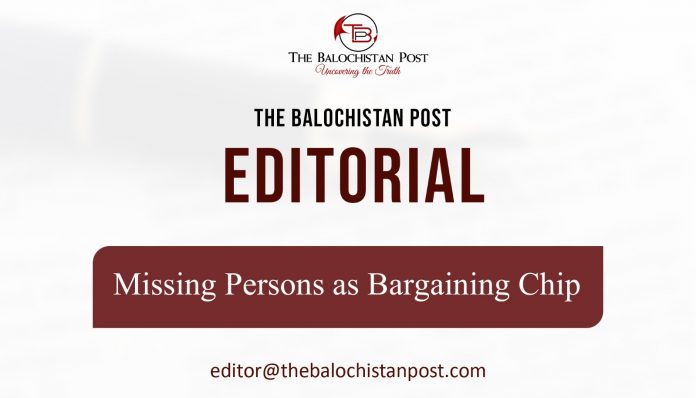 Enforced disappearances are a widespread phenomenon across the world, particularly in the third world countries where possible uprisings are tried to smother by disappearing the active figures of the movements. Such acts are prominent in third world countries as rule of law is weakened there and establishment working behind the curtain are the most powerful forces who easily make and break the governments.

Similarly, Balochistan has also been witnessing the disappearance of its active figures of the independence movement, rights activists and student leaders for several decades now. In the early 2000s, such forcibly disappeared persons were released after a deemed investigation under the custody of intelligence agencies. However, missing persons kept turning up as dead bodies with an increment of the intensity of insurgency in Balochistan.

Whereas, organizations such as VBMP—Voice for Baloch Missing Persons—spearheaded a movement for the release of such missing persons in Balochistan, which is now in its tenth year of continuous protest. Fast forwarding the scenario to 2019-2020, missing persons still exist and they turn up, sometimes alive sometimes as dead bodies, but a paradigm shift has been witnessed in the policy of security establishment of Pakistan regarding Baloch missing persons.

This shift in policy has made Baloch missing persons as bargaining chips to gain favors from Baloch political parties sitting in the central legislature of Pakistan. Which the party leaders have affirmed quite a few times that they have agreed to support the PTI government in the center in return of releasing few missing persons and on another occasion they implied the same impression of supporting a pro-army act in the parliament in return of few more missing persons.

One can understand the happiness of families who find their loved ones back at homes and they care less whatever the bill some political party supports in return of that. But, it should never become a norm in Balochistan, it should be challenged, it is disrespectful and inhumane to bargain human lives for a few votes in the legislature, one does not find such example of humiliation to human life even in the centuries-old history of colonization in this region or any other.

Baloch political forces should avoid this kind of dealings at once, as it will lure security forces to pick up more innocent Baloch students and activists, this time not for their activism or being vocal against establishment’s policies in Balochistan but only to use them as bargaining chips to gain favors again and again from Baloch political parties.

This kind of dealings should also be revealed in the international media and in front of rights organizations so they could condemn this humiliation to human lives and pressurize the establishment to release Baloch missing persons unconditionally on legal and humanitarian grounds, not as bargaining chips.