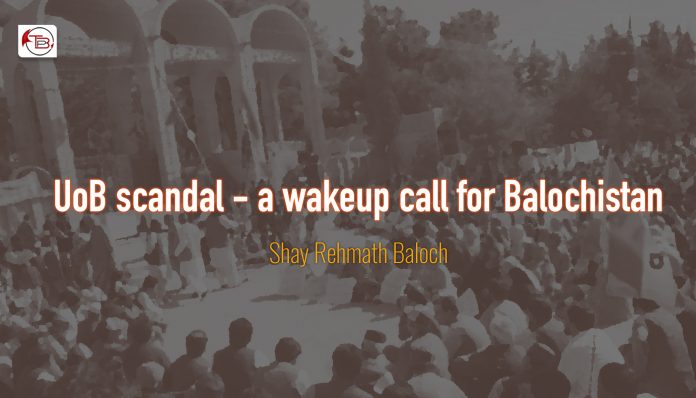 In a place like Balochistan, where several districts like Dera Bugti, Sherani, Mashkay, Kech, Jahoo , Qilla Abdullah etc still practice conservative tribal systems, literacy rates for women are below 10% consistently, we should not allow the safety security, honor and self respect of our students, both male and female to be in a state of fear.

If we glance on the educational system of Pakistan, except punjab where all the federal potential have been put from the foundation of this state, all the nations including Baloch, Pashtuns, Sindhi and other communities suffer from marginalisation.

People advocating for rights need to speak up for this too and why there is a deafening silence?

There are reports of students that they’ve been warned that anyone taking part in the protests will be responsible for the future consequences.

On October 14th, upto twelve videos were discovered, by the FIA which were naked evidences of ongoing sexual predation on students of both genders. The videos were later being used to blackmail students.

There are thousands of cases which happened throughout these years but all of them were brushed under the rug.
It is high time for us to stand in front of these barriers to protect our honours, defense of identities and economic possibilities.

It is a first and must step to guarantee our self respects if, we protect our sisters, brothers, friends from that kind of sexual assault and mental trauma which surrounds them. If we don’t raise our voices, no one else will ever raise any kind of protest against the injustices of this hazardous state .

We come to ask questions that if, education is the only way forward to a successful future, where we will get it and so much for a government which claims to be progressive and claims of being responsible If, this is the way of being educated and behaviours of literate people illiterates are better.

When, will the perpetrators be brought to justice? And who will share a hand of kindness with the victims out of the trauma? These are questions which remain unasnwered.

The bottomline is that you must not remain silent. If you will not raise voice against these cruelties they will have a certificate of doing violations and injustice to the communities of human races . You can not possibly still delude yourself into thinking that our women and children are safe.

If, you are quiet because you fear for the consequences, there will be even worse consequences. There are always consequences for those who they are suffering from ages. We just get to pick our selves and remember, staying silent in front of any kind of violation in the society makes of full criminal of what are you seeing and suffering but cannot raise a bit resistance against these monsters.