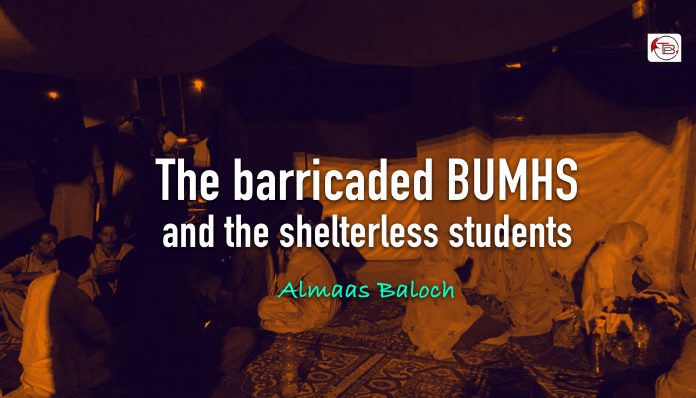 The barricaded BUMHS and the shelterless students

Bolan Medical College commonly known as BMC was promoted to a Medical University two years ago. The abbreviated word “BMC” has changed into BUMHS, Bolan University of Medical and Health Sciences. Lastly when it was announced to be a University, it made a history on which the world will ever make jokes as the single institution has been supervised and administrated by two professors. BMC’s administrative responsibilities were looked after by Principal Dr. Shabeer Ahmed Lehri and BUMSH was operated by Professor Dr. Nakib Ullah Achakzai. Both of the respected doctors had separately dealt with the issues and academic policies of the institution which desperately brothered the students in dealing with administrative issues. Neither the Principal of BMC nor the Vice Chancellor of BUMHS was ready to withdraw, which has remained a tasselled issue between them for two years.

Beside that Bolan Medical College since it’s inception has been the only operative medical college of the province unless the sub-campuses namely Lorlahi, Turbat and Kuzdar colleges were initiated few years ago as affiliated institutions of the BMC. Nonetheless three of the medical sub-campuses were discriminately administrated, each newly built colleges faced the issue of being approved by the PMDC, Pakistan Medical and Dental Council.

Despite of the approval, students from entire Baluchistan have been allocated seats to respective colleges, which was entirely an act of injustice and an unlawfully unacademic gesture but neither the provincial Government has paid attention to this aggravating issue nor the federal Government, which eventually teased and pushed the dejected students to sit in strikes on the roads for the legal demand of registering the affiliated institutions.

Once the only medical college BMC was tolerating the heavy burden of entire Balochistan to produce medical doctors annually. Being the only institution it has raised many concerns in terms of providing quality education and alumni to the society and sometimes its non-teaching staff has been alleged to be involved in process of bargaining and selling the reserved seats of the needy students to the affluent people on basis of political influences and nepotism, because it was the time of being insufficient in terms of awareness regarding the medical institutions, seats and scope.

Gradually when it came to be known by every educated person there appeared the proclamation of conducting an entry test upon which the seats to different students of divisions and districts would be allocated on the basis of adecamic and test result parentages. However, the matter of claiming to be transparent and crystal clear raised many questions and this finally agitated especially the students to allege the mentioned institution of conducting the tests by observing hundreds of irregularities. From NTS (a test conducting institute) to conducting the entry test it has been shifted to HEC (Higher Education Commission) and this institution has once again raised the concerns of the students regarding the merit based tests. So for this is a repeated reason to compell students come onto the roads for demonstrations and hunger strikes.

Whether to mention it a College or University, there isn’t any change to be put as an example. It has been a heap of problems and will remain as a most disturbing burden for the students until and unless they don not graduate.

The students from BMC have been many times put behind the bars, they have restricted and grabbed out of the college, they have been threatened and FIRs launched against them and some of the students just due to unjust nature of the administration and teachers committed suicides.

This time BUMHS has crossed all the levels to testify and prove to be an educational institution, as it has blockaded the hostels for students staying. This institution is going to be another educationally paralyzed institute to perform under the shadow of an army camp same like University of Balochistan.

On pretences of allotment after the summer vocations the hostels of BUMHS has been closed and the students are compelled to sit in on strike day and night. Students of BUMHS when wanted to go to their hostel rooms were refused to enter by the security forces. They were kicked them out and they are now staying in a shelterless camp just in front of the BUMHS.

Last year at the same month, the final year students of BMC just due to unjust and unfair final result and a teacher’s irritating ego to declare the students failed repeatedly has bothered some of the students to sit in a hunger strike until death in the premises of the college.

On the other side closing and blocking the hostels for further staying has been condemned by the YDA, BDF, BSO and BSAC and the authorized authority has been requested to deal with the issue and soon allow the students to enter into the hostels as their previous times are being spoiled sitting a camp without roof just at the entrance of the BUMHS.