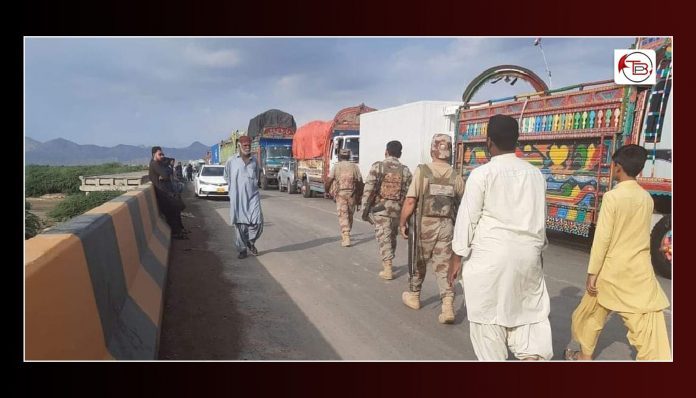 Passenger buses blocked the road as a gesture of protest in Lasbela area of Balochistan on Saturday.

According to details received by TBP, drivers have stopped their buses on the road in protest against the FC’s (Frontier Corps) defiant and inappropriate behavior.

Halted vehicles have caused long queues on both sides of the road at protesting point.

Transporters said that FC personnel have set up checkpoints everywhere and that they are illegally disturbing passengers.

They said that there are children, elderly, women and patients among the passengers in the vehicles but in the name of searching, women are being humiliated and vehicles are stopped for hours.

The Assistant Commissioner arrived on the site to negotiate with protesters, but they refused to open the road and declared the protest will continue until the justice is provided.

Transporters raised the question that there is no FC Customs Act, so under what laws the passenger vehicles are stopped for hours.

It is pertinent to mention that FC check posts are set up everywhere across the Balochistan due to the on-going insurgency in the region where locals are stopped for searching.

On many occasions locals have expressed their concerns about being stopped and checked for hours which wastes their time while they are traveling or going to school and work.