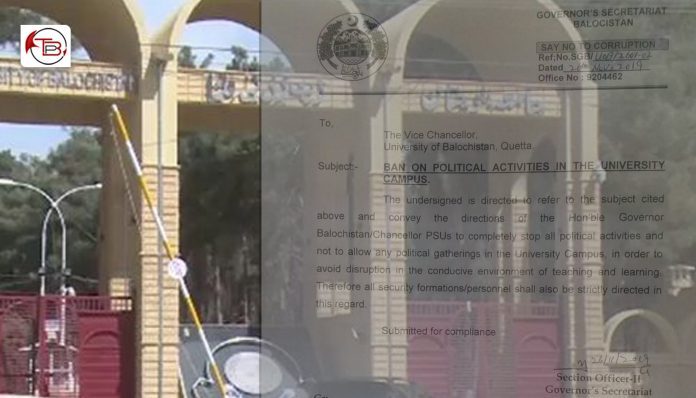 The chancellor of Balochistan University has imposed a complete ban on political activities on its premises with immediate effect.

A notification issued by the Governor House here on Wednesday and sent to the vice chancellor of Balochistan University stated: “No political gathering should be allowed in the university campus in order to avoid disruption of atmosphere conducive to teaching and learning.”

Security institutions and personnel have been directed to take necessary measures in this regard.

After the release of the orders, students’ organizations, social and political parties reacted with condemnation. Where the orders are being considered as a conspiracy to keep students away from the activities, including a veil over the Balochistan University scandal.

The spokesperson for Baloch Students Action Committee (BSAC) stated that Balochistan University is the center of creation and research where thousands of students are studying in which students affiliated with various political organizations are carrying out the political development of their cadres through political activities which is their constitutional right. Eliminating the rights of students by such unconstitutional decisions, the Balochistan government wants to halt the process of political training of future builders so as to create a political uncertainty and suppress the recent scandal.

It is pertinent to mention that, in October this year the FIA, discovered that male and female students were being harassed by the University authorities through “objectionable” videos of them. These videos were recorded using several cameras that were secretly installed at different places in the university’s Quetta campus. The news of harassment scandal erupted protests all over Balochistan and some other cities of Pakistan. But the culprits have not yet brought to the justice for which students are still demanding, which is building pressure on authorities. This is the reason students believe by banning the activities the authorities are trying to suppress the harassment scandal.

Sana Ullah Baloch, Member Balochistan Assembly, said in a tweet, “It is better to close the university than banning political, social and cultural issues at Balochistan University, as the university is actually based on the fields of politics, sociology and history. Students should be given the freedom of expression on political and social issues.”