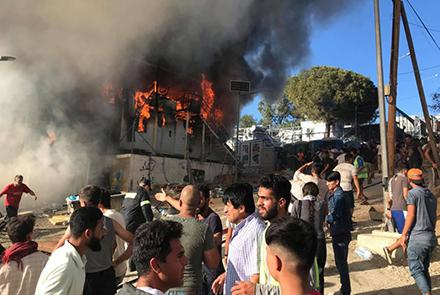 A government spokesman said Greece is now dealing with “a problem of migration, rather than a refugee problem”, citing the nationalities of new arrivals. According to United Nations data, the majority are Afghan families, Tolo News reported.

Greece aims to deport 10,000 migrants by the end of next year, the government said on Monday, following a deadly fire and clashes at its biggest migrant camp which is massively overcrowded.

A woman was killed on Sunday in a blaze which broke out in the Moria camp on Lesbos island. The fire, the cause of which remains unknown, quickly escalated into clashes between asylum-seekers and police. More than a dozen people were hurt.

Moria has mushroomed into the size of a small town of at least 12,000 people, four times its capacity, according to official figures. Violence is common but Sunday’s clashes were the most serious in many months and came as Greece deals with a resurgence in migrant and refugee flows from Turkey.

As well as increasing deportations, the government decided at a cabinet meeting on Monday to tighten its borders and build what it called “closed centers” for undocumented migrants and rejected asylum-seekers who are to be deported, government spokesman Stelios Petsas said.

He said Greece was now dealing with “a problem of migration, rather than a refugee problem”, citing the nationalities of new arrivals. According to United Nations data, the majority are Afghan families.