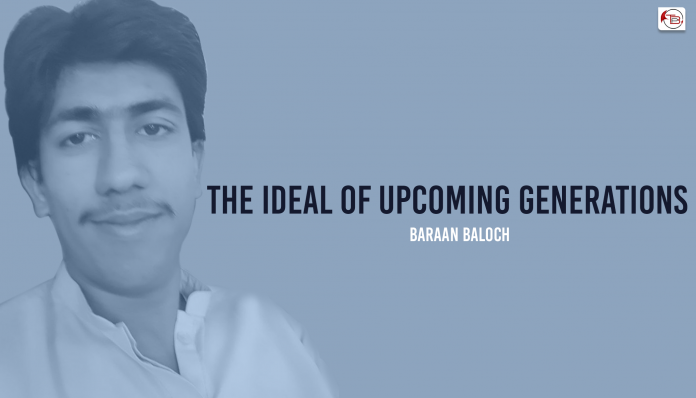 The Ideal Of Upcoming Generations

Rehan is the ideology of thinking and thoughts that have become the Ideal of Baloch nation and as well as other oppressed nations.

He observed the oppressed and helplessness, also he understood every mother’s pain and felt the tears flowing through every sister’s eyes. He was fully awakened and awared about circumstances which we were going through with and knew that what kind of sacrifices are needed at the time. When motherland proclaimed him for the sacrifice than joyfully he devoted himself for the better future of Baloch nation and established a new path which so ever created an unwavering ideology.

He had been raising awareness to the public with his immense character and selected the fidayeen act to direct them into the right path. Rehan Jan implemented a new soul to baloch nation and the youths of Baloch by carrying out a Fidayeen attack and expressed some special words “Rukhsat Afh Awaran Sangat Ak”. These fascinating facts declare that Rehan happily and cheerfully claimed his life’s huge decision and tremendously donated himself for the strategic aim of his life.

If Rehan Jan wanted to survive a normal life, he could but his conscience never accept it that on one side, our mother and sisters are being misbehaved, next side, the martyrdom of our brothers and China’s alliance with Pakistan to plunder our resources, as well as, they are striving to decimate the existence of baloch nation and considering his own nations internal dissimilarities, disappointments and various problems still uncommunicative than his conscience blames himself for these but Rehan was not silent because he was that personality who always smiles and extremely speculates the problems when the right time came. He became active on his mission and gave a sudden surprise to China and Pakistan that they couldn’t even imagined. 11 August 2018 Fidayeen Rehan Jan’s attack brought whole universe into a preoccupation.

Rehan Jan is the scale of the ideology which is spread all over the world who provides consciousness to unconscious people, gives knowledge to ignorants, shows destination to defamers, to strengthen the nation lightly from the darkness and there is a righteous place to a positive destination.

If we give a clear point of view on his background then we can detect high quality professional cultivation. Particularly, suchlike father like General Aslam Baloch and a mother like Bibi Yasmeen who socialized their son to give himself better than oneself and blew him a extreme revolutionary spirit that is today lighteningly apparent in front of us. He is involved in every actions of our life where happiness or miseries, his smiles and golden thoughts makes life full of awareness. if we are ever seized in deep water then his legacy extends a helping hand to handle us with care.

Now it is our obligation that are we having a real revolutionary’s responsibility if “Yes” then how? If truly we’re honest, sincere and serious with our national struggle then have to sight next angles that where we have reached from conscious and intellectual bases. Do we have understandings related to current situations and the stability of our nation? There’s no movement that has been accomplished by unconsciously and on the bases of ignorant. Probably no nation can win only by battling, likewise the emancipation is unreachable. Unless It does not have ability to be conscious, aware and power to face the situations. On the other hand, the baloch movement is suffering extremely difficult conditions where there is only darkness but then how to get rid of it? So, this will be possible when every comrade has awareness about international surface, be knowledgeable about inner most problems of their own nation and be self-conscious and strong in minds then no matter how big the storm is but the boats are out of opposition, there storm will be unsuccessful to defend.

If legend like Rehan are present in any oppressed nation, it is impracticable to continue to enslave them because the strong ideology of the truest revolutionary, no imperialism can suppress the ideology of the faithful arrow. He has now become the ideal of future generations. Wherever the revolutionary and heroic example will be given in the future, there will certainly be the first word like fidayeen Rehan Jan, father like Genral Aslam Baloch, mother like Bibi Yasmeen.

The kind of atmosphere that was born after the martyrdom of Shaheed Rehan Jan is clearly being seen now. All strugglers must be ready in the shape of mentally and intellectually in the favor of independent Balochistan and take the dreams of martyrs to the destination.