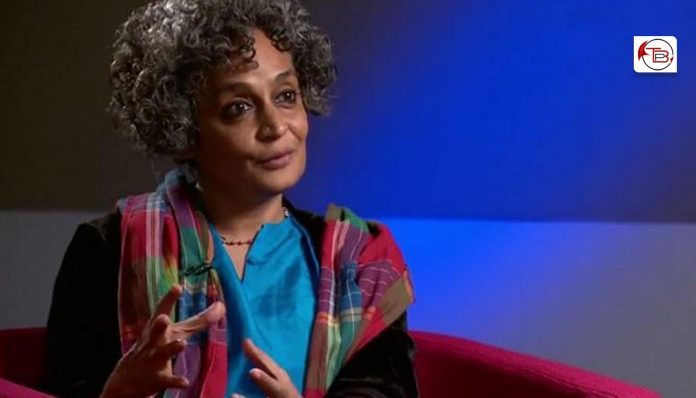 Arundhati Roy apologised on Wednesday for her comments in a nearly decade old video clip, comparing the Indian and Pakistani armies.

According to details, in a video clip of 2011, award winning Indian author compares the Pakistan and Indian armies, saying “Pakistan has not deployed its army against its people the way India has.”

The video clip circulated on social media amid India and Pakistan clashes over the disputed region, Kashmir.

Roy faced a wave of criticism by twitter users of India, Pakistan Bangladesh and Balochistan.

In a statement shared with ThePrint, Roy clarified that at some point in their lives, people inadvertently “say something thoughtless or stupid”.

“Still, it is a matter of enormous consequence and I apologise for any momentary confusion the clip may have caused.”

She added that she has been clear about her views on Pakistan’s actions through her writings.

As tensions rise to dangerous levels between India and Pakistan over Kashmir, a nine year old video clip has surfaced on the social media, in which while speaking of the endless wars the Indian government has waged against its own people, I seem to be saying that Pakistan has never deployed its army against its “own” people the way India has. We all, at some point in our lives, might inadvertently say something thoughtless or stupid. This tiny clip of video in no way represents what I believe, or indeed what I have written over the years. I am a writer, and what I commit to words is far more important than what I might say extempore in the course of a freewheeling talk. Still, It is a matter of enormous consequence and I apologize for any momentary confusion the clip may have caused.

My views on what the Government of Pakistan is doing in Balochistan and the genocide that the Pakistan Army committed in Bangladesh have never been ambiguous and have always been a part of my writing. Here, in order to keep it short, are two small examples.

In my novel The Ministry of Utmost Happiness, published in 2017, one of the main characters, an Indian Intelligence officer, Biplab Dasgupta aka Garson Hobart, who has served in Kashmir, says:

“It’s true we did—we do— some terrible things in Kashmir, but… I mean what the Pakistan Army did in East Pakistan—now that was a clear case of genocide. Open and shut. When the Indian Army liberated Bangladesh, the good old Kashmiris called it—still call it—the ‘Fall of Dhaka.’ They aren’t very good at other peoples’ pain. But then, who is? The Baloch, who are being buggered by Pakistan, don’t care about Kashmiris. The Bangladeshis who we liberated are hunting down Hindus. The good old communists call Stalin’s Gulag a ‘necessary part of revolution’. The Americans are currently lecturing the Vietnamese about human rights. What we have on our hands is a species problem. None of us is exempt.”

In an essay called Walking with the Comrades published in 2010 and republished in June 2019, I wrote:

When Charu Mazumdar famously said, “China’s Chairman is our Chairman and China’s Path is Our Path,” he was prepared to extend it to the point where the Naxalites remained silent while General Yahya Khan committed genocide in East Pakistan (Bangladesh), because at the time, China was an ally of Pakistan. There was silence too, over the Khmer Rouge and its killing fields in Cambodia. There was silence over the egregious excesses of the Chinese and Russian revolutions. Silence over Tibet.

Given my views on what is happening in Kashmir now, it is not surprising that Hindu Nationalists are rushing to generate outrage over this exciting new/old canard they have dug up about my supposed denial of the genocide in Bangladesh and the deeds of the Pakistan Army in Pakistan. Anybody who has even a passing acquaintance with my writing, will not entertain this idea for even one second. I do not believe that the States of India, Pakistan or Bangladesh are in any way morally superior to one another. In India right now, the architecture of pure fascism is being put into place. Anybody who resists it risks being smeared, trolled, jailed, or beaten down. But it will be resisted.