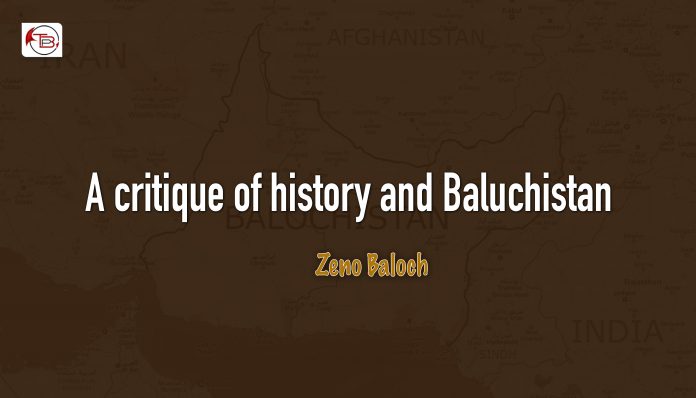 A critique of history and Baluchistan

Baluchistan is the richest land for the poorest people residing in it as for the domestic and global findings. But what is the proximate cause behind that irony? Adversity, delinquency, absurdity or something else? Are we destined to miseries and wretchedness or is that a planned plot? It is actually not a tough riddle.

Our resources do not belong to us because of the crime we have committed; joining Pakistan as a federating unit with three other elderly units that form the federation of Pakistan. The innate crime of being Muslims. The facts are however ambiguous.

All in all, our subjugation, cultural imperialism, exploitation of our resources and overall slavery is justified because this is how the mechanism of the constitution of Pakistan works; with 5% quota from the federal share and 5% participation in the federal government. This is to say, our exploitation is in constitutional domain and thereby fair and legal.

And it is legitimate because history confirms our integration with the British India and that history did not exist before 14 August 1947. History tells us that khan of Kalat considered the parasitic position of Pakistan and signed on the papers of loyalty at all cost.

History tells a lot. But I do not give much preference to history while defining such issues. Yeah, history partly can have something to do with such matters, but the preference should be; “whats happening now?”.

Are the people happy with the current situation? Are they satisfied anymore? Are the circumstance same as they used to be? Or are there grievances, mourning, social injustice, subjugation and disparities! These are actually the crucial factors in speculating such agendas, because these are the actual elements that determine demographic transition, political disruption, social schism and rebellion. And this is how history itself rotates.

South Korea and North Korea for instance are the same nation living under the shadows of two different flags and practising two different ideologies, while they practice the same culture and speak the same language. Lets conclude, history is not actually a fascinating tool for the greater Korean unification.

Furthermore Chinese claim of annexing Taiwan alike is not justified because history witnesses the legality of it. It is in fact next to the fact that Mongols should overrule China–so because once they used to. And supposingly it is all fair. It is not happening easily because there is an ideological conflict.

We can go on and on counting premises like, Greater Arab state because of lingual homogeneity. Or recalling Ottoman umpire which ruled over a huge territory at times on the basis of Islamic ideology. And the former Soviet Union integrated on socialist ideology. The disintegration of Yugoslavia in Balkan Peninsula, seceding into several independent states. The Bismarck’s idea of sketching a new map for the Germans and retreating from France and all.

There can possibly be hundreds of reasons; many differences, changes, reforming and retreating. There can be ideological clash, material competition, religious and sectarian conflict, ethnic imbalance, lingual differences, economic disparity and you name it. These are all equally significant motivating factors for social and political movements.

So we are wrongly trained to perceive the legitimacy of our demand for a separate land solely on the basis of history and ambiguous events.

I am not underestimating the precision of our history to be in our favour; or that what is the right and what is the wrong interpretation of history. Let it be what it is. Whether or not Khan of Kalat signed the papers of accession wishfully or he was forced to do so. Weather there was a general consensus among the chiefs to join Pakistan or not. Were the commoners taken into confidence or there were resistances and antagonism against a forced occupation? Let not give over-emphasis on what happened decades ago, for this is not the sole medium to ascertain the legitimacy of our cause.

History is something intentionally deteriorated and misrepresented to mislead and persuade us to ratify their imposed ideas that, it is Islam that unites us, Mohammed bin Qasim was our first Hero, Pakistan means “La ila ha illallah”, those who speak against Pakistan speak against Islam and all. It sounds ridiculous, but this is how it works. This is a colonial trend. They keep on manipulating history in many ways, just to reinforce their grip on us, perpetuate their colonialism. And this is nowise worthy as it is said, “the problem with the history is that, there is too much of it.”