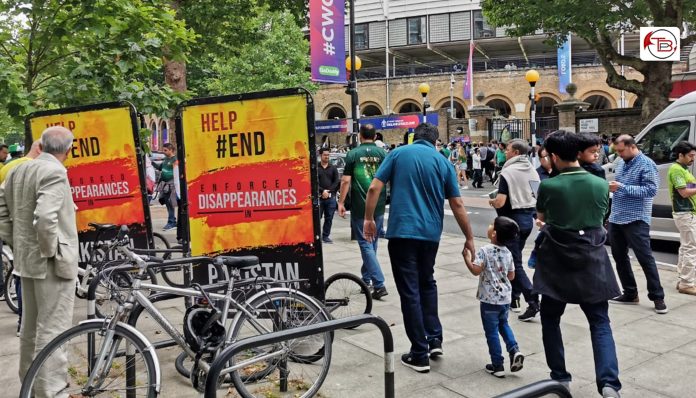 Campaigners responsible for the recent awareness campaign in the UK that highlighted “Enforced Disappearances in Pakistan” have registered a case against the vandalizers who destroyed the banners outside the Lords Stadium in London on 24th June 2019. The incident happened after Pakistan-South Africa cricket match, in which Pakistan Army chief General Qamar Javed Bajwa and ISPR spokesman Asif Ghafoor were also among the spectators.

Several men could be seen on multiple video clips damaging the banners while shouting slogans in favour of the Pakistani military. Additionally the individuals were later seen on social media bragging about their crime. However, the identities of the individuals involved have not been disclosed as it is said to hinder the investigation process.

It is to be noted that individuals involved in the crime were seen clicking pictures with the head & spokesman of Pakistan Army before destroying banners calling for an end to enforced disappearances. The Human Rights groups have blamed the Pakistan military and secret agencies for the enforced disappearances of Baloch, Sindhi, Pashtun, Mohajir political activists and members of religious minorities in Pakistan.

Campaign group that registered the case has claimed that the UK Metropolitan police has started investigating the evidence provided against the vandalizers in the field report.

The campaign mostly focused on growing cases of enforced disappearances in Pakistan, calling for an immediate end to the inhuman practice.

Various activities were held in different cities of the United Kingdom during the cricket World Cup to raise awareness among the masses about the dire human rights situation in Pakistan, where 20,000 people from Balochistan alone have allegedly gone missing at the hands of Pakistani security forces.