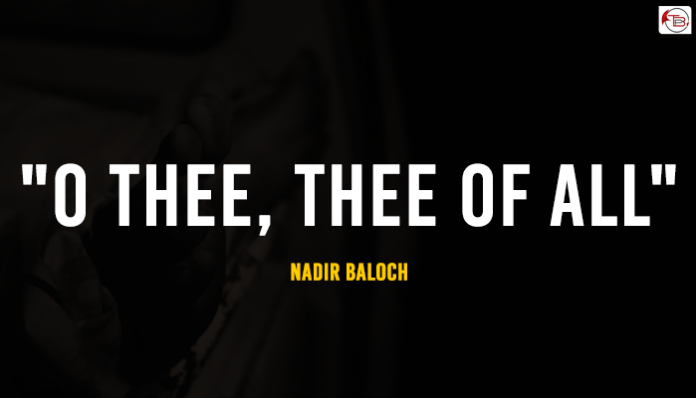 The Global village: where we humans live, the population here is about 7.5 billion. Still many nations, groups, and minorities are struggling to regain their lost freedom and identity. In the present world where the developed countries have given rights to their animals, plants, minorities, and individuals to live a life of their own choice, on the other hand in third world countries, the oppressed nations are trying to keep their national identity safe, sacrificing their lives to gain Basic human rights, bearing deaths of their youth, children and women for the sake of freedom.

Balochistan has become a land of Missing persons, where among the numerous concerning issues, the most horrifying one is the enforced disappearances by the occupying state, Thousands of victims never came back to their homes, they were brutally tortured and killed, many of them faced the barbarism even after their death, acid was poured on their faces and their body parts like liver, kidney, and eyes were taken off, their mutilated bodies were hung on the trees or their bullet-riddled bodies were thrown on roadsides.

The fear rules in every valley, the eyes never sleep at night on this piece of land. Oppression is at its peak, lives are on the threat. The only power is Pakistani military and its local allies gained the name of death squads. Forceful abductions by state agencies and military can’t be challenged in any court of law. The justice system has become a silencing tool of the state’s suppression. The occupied territory has become a jungle, where only might has the right, due to the absence of law and media blackouts, avoiding international laws and so-called missing constitutional rights.

The state uses torture to silence the voices of people for their rights, the right to live, the right to education, the right to think, the right to freedom. The government is only interested in looting minerals, natural resources, making demographic changes in the region through ethnic cleansing and genocide by the kill and dump policy.

The Occupying State is highly involved in war crimes against humanity. Neglecting the united nation and Geneva conventions and accepted laws in the war-affected zone. The pain of missing persons and their families can’t be expressed in words, but as a human being its duty of civilized world, flag barriers of human rights organization, and individual to feel this pain and sufferings and be the voice of oppressed.

Below are few lines to honor the people, families, victims of enforced disappearances, struggling activists against injustice, slavery, suppression.

Help the Oppressed and Give Them Will,
Make Them United Like the Chiltan Hill,

Give the Nation, the Strength to Stand Still,
Take The Evil Forces beyond the nill.

O Thee, thee Of All, O Thee,
Take My Voice Out Of This Silence
Tell My Father I couldn’t make it as a Son
Help My Mother and Sister to Dry her tear
My brother will protect the truth, he swears.

Give “Freedom” to Every Oppressed or let their Souls be free,
“O thee, thee Of All