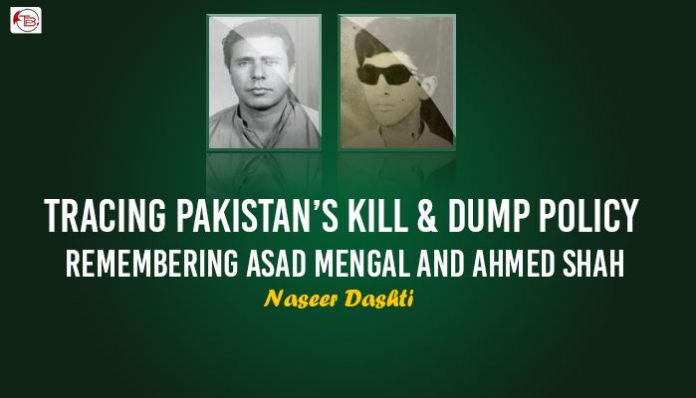 From the beginning of the 21st century, hundreds of the Baloch from Balochistan have been abducted by Pakistani security agencies. The whereabouts of hundreds of victims are still unknown and the family members are waiting for any news about their loved ones. The most tragic side of this phenomenon that has been termed amnesty international as the kill and dump policy, the security agencies frequently throw bodies of some of the disappeared person on desolate regions. The ‘Kill and Dump’ policy began under the military rule of General Pervez Musharraf, has continued under various so-called civilian governments. The policy focuses on the detainment of Baloch activists, holding them incommunicado for an unspecified time during which they are subjected to torture, interrogation and execution and subsequent dumping of bodies. In the majority of the cases, these bodies bear marks of brutal torture and mutilation. Amnesty International (AI) in its 2o12 briefing noted that: “According to our own research at least 249 Baloch activists, teachers, journalists and lawyers have disappeared or been murdered between 24 October 2010 and 10 September 2011 alone, many in so-called ‘kill and dump’ operations.”

The kill and dump strategy has been adopted by the security agencies and being executed in a planned manner in the attempt to physically wipe out the cream of the Baloch society. Anti-social and extremist religious elements organized by state security agencies in various parts of Balochistan are being used in identifying, kidnapping and dumping bodies of the Baloch nationalist activists. They are popularly known in Balochistan as the army’s ‘death squads’.

Although the intensity of the phenomenon increased during the first two decades of the 21st century, the tale of kill and dump policy in Balochistan goes many years back in the 1970s. A prominent casualty of the policy was the eldest son of Sardar Ataullah Mengal who was the first elected chief minister of the province of Balochistan. While the veteran Baloch leader was in Hyderabad prison along with other Baloch and Pakhtun leaders and National Awami Party activists being tried on treason charges in the famous Hyderabad Conspiracy Case, his son Asad Mengal was coordinating political mobilization against the military operation in Balochistan. The security agencies believed that he was not only coordinating mass mobilization but also the resistance movement in central Balochistan.

Asad Mengal and his friend Ahmad Shah Kurd disappeared from the face of the earth on February 6, 1976. The authorities declined to admit their role in their disappearance. However, their friends and family members knew that they were picked by the personnel belonging to intelligence agencies. They were ambushed in their car near Muhammad Ali Housing Society in Karachi. Gunshots were heard by eyewitnesses and the residents of the area, their blood was splattered all over the car, but their bodies were never found. At the time of their disappearance rumors circulated that they were killed at the spot and their bodies were taken away while others believed they were killed later in a detention center by the military.

The demands by family members and political leaders to present them in a court of law fell on deaf ears. The army was so powerful that even Mr. Bhutto, the Prime Minister of Pakistan at that time, was not told the real story of the disappearance of Asad and his friend. It is said that Mr. Bhutto who had dismissed Mengal’s government earlier was greatly worried about the fate of former chief minister of Balochistan but his army chief, General Zia asked him to keep quiet over the matter. Bhutto did not dare to act against his general’s command.

After the overthrow of Bhutto regime by the army in 1977, the military regime released Baloch leaders; however, the fate of Asad and his friend remains unknown. According to a Pakistani journalist Hamid Mir having close ties with the military establishment, he was told by General Tikka Khan who was the army chief before the appointment of General Zia that Asad Mengal and his friend were picked up by the army from Mir Balakh Sher Mazari’s house in Karachi in 1976 and killed somewhere near Thatta where he was hurriedly buried. On February 20, 2012, a former chief of Inter-Services Intelligence agency (ISI) Lieutenant-General Hamid Gul acknowledged during a television talk show that Sardar Ataullah Mengal’s son, Asad, was killed in an interrogation center during Zulfikar Ali Bhutto’s era.

50 years on since the disappearance of Asad Mengal and his friend, hundreds of the Baloch political, social and tribal figures have disappeared and their whereabouts are not known to the affected families. Some were fortunate to find the bodies of their loved ones on some desolate places. However, the majority are still waiting to hear about them. The impunity given to security forces and the lack of interest in the affairs of Pakistan by international humanitarian organizations, the families of the victim of kill and dump policy has no hope for justice. Asad Mengal was the first victim of kill and policy in Balochistan. His 90 years old father Sardar Ataullah Mengal, his younger brother Javed Mengal and Akhtar Mengal, family members and political friends might never receive any news regarding the remains of Asad Mengal. They may never know what actually happened to him and his friend and this is perhaps the most tormenting part of this sad episode.