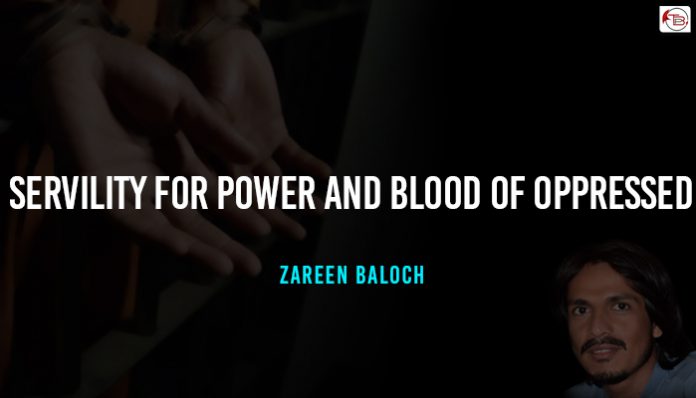 The word “Humanity” itself explains all the positivities of the world, it is love, prosperity, generosity, kindness, humbleness and peace, but being Baloch we never had experienced sympathy or such rewards which the word “Humanity” constitutes, either we are not being considered as humans or humanity does not exist in this part of the world.

Recently 6 Baloch leaders were killed by a Pakistani suicide bomber at their home, nobody raised a single voice for them, Hundreds of Baloch families live in exile in neighbouring countries such as Afghanistan, but it looks like they all are under attack now and there is no place left for Balochs where they should seek a safe shelter.

Rashid Hussain a resident of this hidden paradise, Balochistan, migrated to UAE for the same reason.

On 26th of December 2018 when he was going to Sharjah airport, he was abducted by UAE intelligence in-front of his cousin and shifted to an unknown place. About a month has passed since his abduction, what Pakistan was doing with Balochs, abducting and keeping them at unknown places for years UAE is doing the same. International laws, human rights, foreign policies all are being violated, but international communities are keeping their mouth closed on this issue after all Rashid Hussain is also a Baloch.

When Pakistan proudly announced the detention of Rashid Hussain and defended his statement by linking him with BLA, and blamed him for a successful attack on a Chinese consulate in Karachi by BLA, but nobody asked Pakistan, was 14-year-old Majeed Zehri was also a militant? whom you kidnapped, tortured and within 3 days of his abduction killed him brutally, his mutilated dead body was recovered in an unrecognisable condition, was he a terrorist? Just a 14-year-old child?

Did anyone ask Pakistan whether an uncle of Rashid Hussain and father of Majeed, Haji Ramzan, was also a terrorist? whose body was riddled with bullets, had the 70-year-old man ever spoken a word against you that you killed him? His blood-soaked body was buried with tears. You snatched their all property and forced them to migrate and leave their homeland, now who is terrorist you or they? You killed Zia Baloch, brother of Rashid Hussain, you abducted his many family members but who is going to ask you for this brutality?. The world is blind, dumb and deaf when it comes to Balochs, they can’t see the ongoing genocide of us, they can’t hear our oppressed voice, they can’t stop us being butchered by the Pakistani army.

This behaviour of the world has proved to us that God helps those who help themselves. We have learned to help ourselves, on with our broken arms, we have learned to tie a bandage on our wounds, with our blood-soaked shirts, we started to wipe away our tears, we learned that for a human cause, power matters and we are powerless. Now we were not expecting any sympathy from the world, Instead of helping, instead of showing sympathy UAE state becomes active against Balochs in servility of Pakistan.

The abduction of Rashid Hussain is not a big issue as the life of Balochs never mattered for the world, he will be killed like rest of his family, like rest of his nation but history will always remember the servility for power, and blood of oppressed.