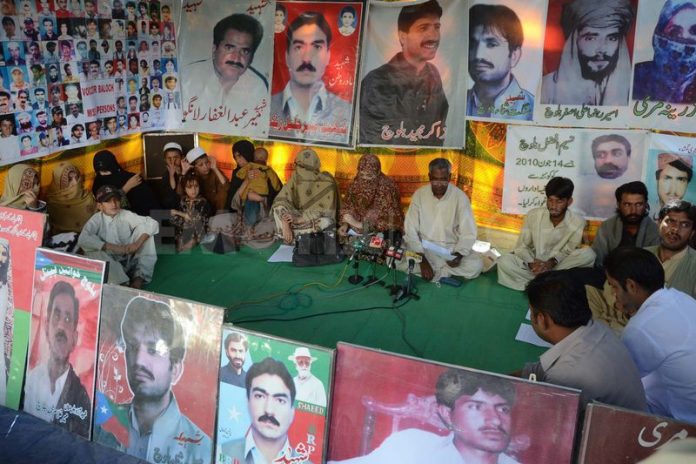 He further added, “On one hand, the Government is asserting to be working for the solution of Baloch missing persons issue, on the other hand, I am receiving threatening phone calls (26 calls; just yesterday) from the Government and its security agencies. As if the threat calls were not enough and effective; I, along with the affected families faced harassment at the hands of dozens of people, who approached us at the VBMP protest camp with a similar message, i.e. to either wrap up the VBMP protest camp in Quetta, or face dire consequences. I want to inform the media, Human Rights organizations and the United Nations, that if anything happened to me or any other member of VBMP, then there will be no one responsible but both the federal and provincial Government, its security agencies and the Army. I am afraid that  authorities are planning my assassination, as they did with Saba Dashtyari and Sabeen Mahmood.”

“During a press conference with VBMP, Jam Kamal, chief minister of Balochistan, made promises to work on a solution regarding missing persons and requested VBMP to end its protest camp. However, that same night, Rashid Wali Baloch, who is employed in an Arab gulf country, who was on vacation to his hometown, Gwadar, was abducted. As usual, the witnesses held security agencies responsible for his  enforced disappearance. Somewhere else, the Army forcefully abducted eight Balochs in Tump (Turbat) during a local football match, in the eyes witnesses of several people.”

“A ruthless military operation is ongoing in Kohlu, Kahaan, Dera Bugti, Mazzan Band, Zahmuraan and other parts of Balochistan. During these operations military looted valuable goods, livestocks and vehicles of local villagers. Unfortunately even in a 21st century world these areas are deprived of internet and telecommunication facilities; which makes it difficult to complete and verify reports. The local  media is completely silent about such cases, and these areas have become  “no go zone” for journalists.

Mama Qadeer further added, “Zia Langove, Interior minister for provincial Government of Balochistan has been briefed about the 110 cases of those affected families, who are currently present at the VBMP protest camp. Whereas, the actual number of missing persons is in thousands, and the details of these cases have already been provided to the Government and Human Rights organizations by Baloch Human Rights Organization (BHRO).”

“The other day, I was surprised to read the news published in “Jang” newspaper, which stated that from 21st January onwards, only 86  cases have been heard by commision for the investigation of enforced disappearances, headed by retired judge, Fazal Ur Rahman. The news seemed to be ridiculous, as around 110 families of Baloch missing persons are present at our protest camp, let alone the other thousands of cases of enforced disappearances, the list of which, have been also provided to United Nations during the Universal Periodic Review (UPR) session in 2017. Apparently, the Government has been attempting to hide the issue of enforced disappearances in Balochistan during the current visit of Maria Espinosa, the President of United Nations General Assembly, to Pakistan”. he said.

“We would like to notify the world, Human Rights organizations and journalists, that the Government has itself violated the agreement announced during the mentioned press conference, by forcefully abducting the above mentioned Balochs from Tump (Turbat) and Gwadar,which  made it clear to us  that the Government and its authorities, including the Army, are not taking the issue Baloch missing persons seriously’’.