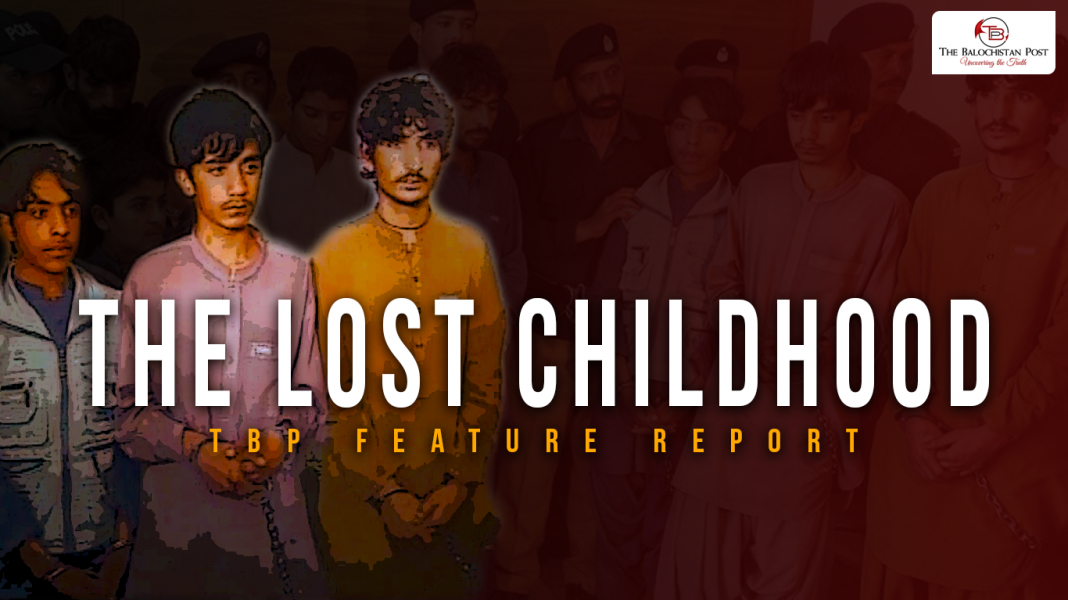 These journalists had to submit stories to their employers and this news was to grapple many viewers. In the TRP race, even the basic journalistic practices were ignored. No counter questions were asked, and whatever the police officials said, it was published as factual news. The children were already declared criminals, long before any criminal proceedings had even begun.

“It is utterly shameful to declare anyone a criminal without conviction whereas these are just children,” social development and child rights specialist Salma Jaffar told The Balochistan Post. “Even juvenile offenders cannot be treated as criminals whereas these were innocent children – victims of adults’ wars,” she added.

The Express Tribune, one of the largest English dailies of Pakistan, on the day of the press conference published on its website: “UBA had lured the children, who came from poor families, to leave packages containing home-made bombs in markets, dustbins and on routes used by police and security forces”.

United Baloch Army or UBA is an armed organisation and claims to be struggling for ‘independence of Balochistan’. It has claimed responsibility for some of the most deadly attacks.

The children were accused by the media houses of carrying out UBA’s Mezan Chowk blast in 2013, which left more than a dozen people including three frontier corps personnel dead. The only evidence presented against this accusation was forced confessions of children obtained under Pakistani police custody. The logistic possibility of children carrying out such a deadly attack in itself raises doubts at the accusations.

Pakistani police is notorious for obtaining forced confessions through torture.  Pakistan, which ratified the Convention against Torture in 2010, has failed to stop medieval torture practices by its law-enforcement agencies. United Nations panel last year condemned the “widespread practice of torture” in Pakistan by police, the military, and intelligence agencies. Activists and family members of the children believe torture was used to confess the children before media.

The story stayed on national media for few days and the government officials used it for their benefit. But then the whole episode was forgotten and many believed the children were released. However, on Thursday the issue received limelight again, when after more than 5 years an anti-terrorism court in Quetta acquitted the accused children ‘due to lack of evidence’.

All this time the children were languishing in jails and put under anti-terrorism courts for five long years. “What is angering is that we didn’t see any news on these children after that, therefore, conveniently assumed they were released. This makes me feel so sad. Where were the human rights and child rights organization all these years?” asked Salma Jaffar.

Criticizing the local media and political leadership, Salma Jaffar said: “Where was media? Where was the political leadership of Balochistan. You know what? It is this silence that is criminal not these children. I always blame Punjabi media but where were our local journalists who never tracked this story. We must share some responsibility how can we ignore our own children?”

Salma Jaffar also lambasted media and political leaders on intentional covering up of the whole issue. “Just look at Pakistan’s media and politicians, there is not a word for these children. In any other country this would have been a big scandal and would have made top headlines but unfortunately in Pakistan we are the victims of our own ignorance and distracted priorities.”, she said.

She also pointed out legal irregularities in the process of holding the trials under anti-terrorism court: “It is shocking that these children were put under the ATC. According to law they were to be tried by juvenile courts? There is an age wise protocol for juvenile courts. Who knows if the protocol was followed? Were these children informed of their rights? I have my doubts because if it were, these children would have been released sooner,” she said.

She added: ‘In accordance with Juvenile Justice System Ordinance (JJSO) the children had the right to legal aid. Was that provided in time? It seems not till now – if it were timely they would not be rotting in jail for 5 long years. This is totally unacceptable.’

The children have lost a very important phase of their lives to unjust detention. There is high chance they will be institutionalised as they are entering the outside world at an age, when they are expected to stand on their own. However, the deprivation of education and personal development opportunities due to detention will make their lives difficult in outside world. Many such children in Pakistan turn to the world of crimes.

Salma Jaffar also confirmed this and said: ‘there are documented trends resulting from early child detention which include intense stigmatisation from the community and family, weakening self-confidence, and a recidivism rate that can turn children into hardened criminals – how this damage can be undone? It is critical these children get specialised help for reintegration.

Taj Baloch, the Chairman of Human Rights Council of Balochistan, said: ‘My fear is, the children must have been brain washed and radicalised during detention. We have seen many such cases in Balochistan. Security forces abduct the teenagers, keep them for years and the victims would start going to mosques five times a day, after they are released’.

Salma Jaffar thinks these children must go through a rehabilitation program where psychosocial support is provided to them. “The compensation for destroying their childhood and giving them these scars is that after psycho social rehabilitation program they are admitted in good schools this is the best a government can do to compensate for the crime it has committed,” she said.

Taj Baloch also expressed similar concerns and said: ‘five precious years of the children were wasted by the state. Children have suffered much, even if not tortured physically. The children and their families must be compensated with effective remedy by the state or the international mechanisms, if state fails to do so.’

Salma Jaffar confirmed that she is already in contact with NGOs regarding the issue. ‘I am in touch with SPARC (society for the protection of the rights of the child) on this but SPARC is basically an advocate organisation, we also need to explore with SEHER (society for empowering human resource) to see if they have the capacity to provide specialised rehabilitation. But it is the duty of the government to enrol these children in such a program,’ she told TBP.

Whether the children will be provided rehabilitation support is yet to be ascertained, however, the case should be throughly investigated to establish why the precious periods in the lives of these children were destroyed.

Salma Jaffar urged that those responsible for this must be made accountable. She said that the media must play its role and investigate into this issue and bring it to the knowledge of people so that people know what are their and their children’s rights in such situations.