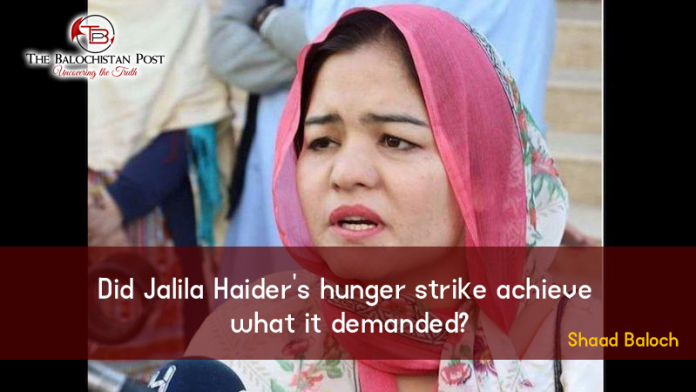 Jalila Haider, an advocate by profession from persecuted community of Hazara living in Quetta, took a historic step to let the world know how wrongly they are being dealt. She raised her voice just after an incident in which two Hazaras were shot dead. She wanted to bring all possible attention towards the plight of her people. She sat on unto death hunger strike. One of her main demands was to meet the chief of Pakistani Army, as she wanted him to look in person what circumstances the three thousand Hazara widows are living.

Initially there were only few men and women in the camp but this soon turned into a huge crowd where people from various communities expressed their support for Jalila’s demands. There were three other protest camps at different sites in Quetta and all demanded immediate stoppage of Hazara target killings.

Hameeda Hazara, an activist present at the hunger strike camp asked: “Why are we being killed? Why Baloch and Pashtun are being killed. Is their only crime is to open eyes in a Hazara, Baloch or Pashtun family? If yes then they will never change their identity because it not anything to alter, so come and finish all these ethnic classes to quench your thirst.”

The activists during the strike spoke to media and said that they know who are the killers. The murderers are roaming around freely and conducting public gatherings at various locations in the capital city of Quetta. The provincial government knows them better than anyone else but still for more than a decade they haven’t even touched them. However, to fool us they have always assured that the killers will be arrested but this has never happened and the genocide has continued. Whenever Hazaras have demanded action military operations have been carried out against Baloch living around Quetta suburbs. For god sake halt such policies of suppression, our demand of action against perpetrators does not mean countering other communities.

Jalila Haidar demanded: “The Army chief has to come and meet the three thousand widows to see for himself what the Hazara families are going through. The whole community has been restricted to one single area and going to schools or hospitals is parallel to lossing ones life. If the Army chief cannot come and meet us then they shouldn’t claim restoring peace.”

She added: “We know who is behind Hazara killings and suppressing the Baloch and Pashtuns but few puppets coerce the victims to point finger towards Baloch nationalists.”

Some of the activists including Jalila Haidar and Tahir Hazara openly pointed towards Army being behind the sectarian groups. They said Army is sponsoring these grups to suppress the Baloch nationalist movement.

However, Jalila’s stance became questionable when she went to the Army cantonment to meet the COAS Qamar Bajwa. Her initial and main demand was that Army chief should visit the hunger strike camp.

The Hazara community also agreed to end all other protest camps after assurance by the Army. This has also raised questions as the same Army betrayed Nawab Nouroz Khan over the Holy Quran. Therefore, the question arises on what basis the Hazara representatives have agreed to trust on Army?

No one knows better than Hazaras about fake assurances. They continue to be targeted because the groups behind such crimes have been given impunity to create an environment of fear. Their methods might change but not their objectives.