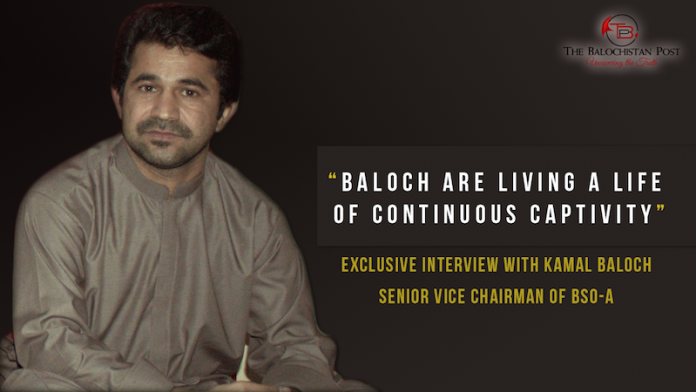 Kamal Baloch is Senior Vice Chairman of Balochistan’s largest and most popular student organisation called BSO-Azad. While Mr. Baloch was a student of MA Sociology in University of Balochistan, he was ‘kidnapped’ and tortured for 3 months in Pakistani military torture cells. He had to discontinue his education. In November 2015 Mr. Baloch was elected as Senior Vice Chairman of BSO-Azad during the central council session of the organisation.

The Balochistan Post recently conducted an exclusive interview with the student leader, which is published here for the interest of its readers.

The Balochistan Post (TBP): Why the Baloch students have always been attracted towards nationalist slogans and they have been comparatively more politically active than the students from neighbouring nations?

Kamal Baloch (KB): First of all I would like to thank you for taking our opinion. I now come to your question, which is about students or the brave sons of a slave nation who are tirelessly facing the difficulties of an enslaved society. In such societies, students face numerous types of hardships, every child that is born in a Baloch home under this tyrannical state is born with numerous shackles. Getting education in Balochistan is no less than a war as students are subjected to daily humiliation and torture at the hands of Pakistani security forces.

It will not be wrong to say that we are living a life of continuous captivity. Pakistan forcefully occupied Balochistan on 27th March 1948. The people of Balochistan have since been forced to live under colonialism, which has resulted in many socio-political issues and stagnation of society’s development. To an extent that Baloch are not even allowed to learn their mother languages Brahvi and Balochi. Whereas, foreign languages like Urdu, Arabic or English are imposed upon us.

In nutshell each Baloch has to confront many risks to his life on daily basis and with this you can easily judge what hardships the Baloch students have to face in Balochistan. This has attracted many Baloch students to struggle for the emancipation of their motherland.

TBP: According to reports scores of Baloch students have gone missing including many from your organisation, is it true?

KB: Yes, that is correct. There are hundreds of Baloch students who have forcefully been disappeared by Pakistani Army in broad daylight. Many of these students have been torture murdered in detention cells, whereas, hundreds are still missing.

Many members of our organisation have also been subjected to this brutality. These include senior leadership of our organisation as well as ordinary members. Secretary General of BSO Raza Jahangir, former Senior Vice Chairman Sangat Sana Baloch, Agha Abid Shah, Shafi Baloch, Kambar CHakar Baloch, Iliyas Nazar, Farid Baloch, Wahid Balaach, Majid Baloch, Hasil Baloch, Shah Nawaz, Ijaz Baloch, Kumar Baloch, Shakir Balohc, Sadiq Baloch, Siraj Baloch and many others have been killed in last few years. Since 2005 our members have faced the wrath of Pakistani Army on daily basis only because BSO activists have tried to raise awareness amongst Baloch youth. Baloch are proud owners of a civilisation that dates back to thousands of years and hold a political ideology enriched liberalism and progressiveness that an extremist state like Pakistan is unable to tolerate ever.

The latest examples of this barbarism are the recent abductions of Central Secretary General of BSO-Azad Sanaullah Baloch and Central Committee members Naseer Baloch, Hassam Baloch and BNM activist Rafiq Baloch who were abducted on 15 November 2017. They are still missing. Another alarming case is that of enforcedly disappeared students from Karachi that include children too. Ulfat Baloch, Fareed Baloch, Nawaz Atta and Ilyas Baloch were all arrested and taken away from Karachi. Similarly three activists Tariq Baloch, Abdul Samad and Jaffar Sanjarani went missing missing from Tump, an area of district Turbat in Balochistan. Sajid Baloch from Panjgur and teenager Asim Baloch from Turbat who are secondary school students were recently taken away by Pakistani forces.

All these abductions are to suppress and subjugate the Baloch youth from raising socio-political awareness as the Pakistani state is well aware that if this happens the general public will rise for their rights.

TBP: It is said that CPEC has the capacity to change the life of the common Baloch, why it is opposed by the nationalist forces if that is truee?

KB: CPEC is an imperialistic project imposed upon Baloch nation by Pakistan and China. This exploitative project has already displaced thousands of Baloch people. As soon as this project was initiated, Pakistani Army forcefully evacuated many Baloch hamlets and villages on the route of this China funded multi-billion dollar project. Same as the Gwadar port project, where thousands were displaced for the so-called economic prosperity but in reality the local inhabitants now cry for a drop of water.

CPEC is just a strategic move by China to increase its military might in the region and utilise Baloch coast to convey a message to the world. China has stirred regional imbalance and is a threat for the South Asian countries.

For securing CPEC project and its route, Pakistan is engaged in a brutal operation in Balochistan which has compelled thousands of Baloch people to migrate and live as refugees in different parts of Balochistan, Sindh and Punjab. A large number has even migrated to Afghanistan to secure their lives.

However, we believe CPEC will never get accomplished as Baloch have always resisted against foreign intruders. Baloch nation has never allowed alien powers to use its land against the global peace.

TBP: There is an argument that Baloch should contest elections and raise their demands through provincial government. What is your opinion?

KB: We consider the so-called provincial government in Balochistan as puppets of Islamabad and it does not represent the Baloch nation. The so-called political parties that participate in this setup are hands in gloves with Pakistani state to carry out inhuman armed operations against Baloch populace. These groups are being used by Pakistani state to further its exploitative projects in the region.

Baloch nation has time and again boycotted this so-called setup because no person in its sane mind will become part of a structure where policies to commit genocide against its people are made.

The elections of 2013 are a very concrete evidence of how Baloch has rejected anything to do with the Pakistani setup. The so-called candidates could only amass hundreds of votes in constituencies where the electorate consisted of tens of thousands voters. But even then the Pakistani state selected few of its agents to make a dummy provincial assembly. Just in span of 5 years they had to change the Chief Minister three times. Initially the selected Dr. Malik followed by Sanaullah Zehri and now they are using Abdul Qudoos Bizenjo. All of these are used as tissue papers and will be disposed off once they are deemed no more useful. How can Baloch be part of such a sham mechanism?

BSO-Azad has very clear policies of not becoming part of any setups that are aimed at exploiting our motherland Balochistan.

TBP: BSO certainly has a long history which can be traced back to 1967 but when and why BSO Azad was formed?

KB: BSO Azad, founded by Baloch leader Dr Allah Nazar and his colleagues in January 2002, is a peaceful organisation that educates Baloch students and youth about their rights and the Baloch freedom movement. BSO-Azad is proud to enjoy trust and love of Baloch nation. Afraid of its popularity, Pakistani state has proscribed BSO-Azad, otherwise, there is no BSO-A activity that warrants proscription.

We believe this ban doesn’t carry any meaning as the relation of Baloch nation and Pakistan is that of a master and slave.

TBP: How can the problem of Balochistan be resolved?

Obviously the entry of China and CPEC have complicated the issue as with it an influx of millions of foreigners is foreseen. This will convert Baloch nation a minority on its own land. Therefore, Baloch nation has accelerated its resistance against this project as was done against General Musharaf’s Gwadar port project.