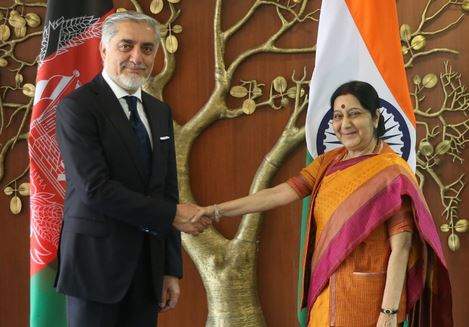 Dr. Abdullah arrived in New Delhi on Thursday to hold talks with the Indian leadership and to inaugurate the India-Afghanistan Trade and Investment Show with Indian Finance Minister Arun Jaitley.

Both India and Afghanistan have slammed Pakistan for harboring terror groups and recently during the United Nations debate on the ‘situation in Afghanistan’, Foreign Minister Salahuddin Rabbani said: “terrorism and violent extremism affecting Afghanistan is the product of a long-standing policy by a neighboring state to keep Afghanistan unstable.”

Talks between the governments of Afghanistan, India and the United States have increased after President Donald Trump announced Washington’s latest strategy for Afghanistan and South Asia.

Defence Minister Nirmala Sitharaman told U.S. Defense Secretary James Mattis that India will continue to expand its engagement with Afghanistan in various sectors, including development, medical assistance, energy etc, but emphasized that New Delhi will not send its troops.

“India and Afghanistan enjoy deep rooted civilisational links. India has been partnering with the Government and the people of Afghanistan in their efforts to build a stable, peaceful, prosperous, united and pluralistic country,” the MEA said in a statement

“The visit follows the recently concluded second meeting of the Strategic Partnership Council, which was co-chaired by the External Affairs Minister of India and the Foreign Minister of Afghanistan, where both sides ushered in next generation New Development Partnership,” it added.

Mattis after his visit to India went to Afghanistan where he held talks with Afghan President Ashraf Ghani and other Afghan government ministers to implement U.S. President Trump’s strategy of greater regional cooperation to stabilize the security situation in Afghanistan.