The Balochistan Post
Home News The savagery of August – Editorial 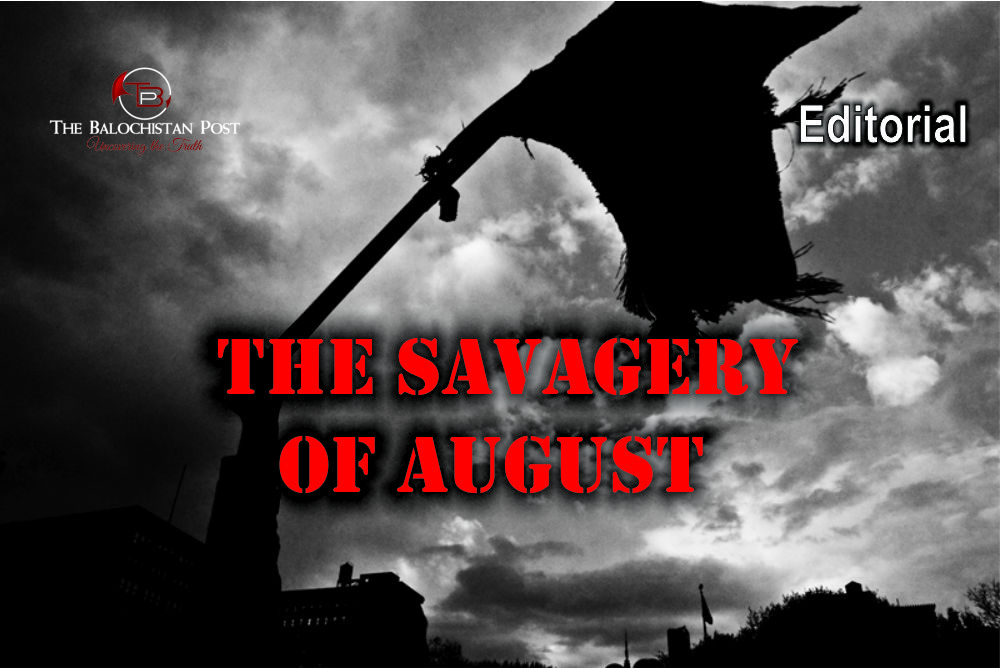 The month of August has always brought brutalities with it for Baloch nation. This month is bloodied with the murders of thousands from Akbar Khan Bugti to Rasool Baksh Mengal. The main reason for the bloodshed in this month is due to two important dates in it – 11 August, the independence day of Balochistan from British Empire, and 14 August, the day of creation of Pakistan.

The Baloch pro-freedom activists start their preparations for 11 August as soon as the month commences. They try to observe this day by disseminating information about the true history of Balochistan and the fact that Baloch existed as a separate and an independent entity long before Pakistan was created. The celebrations of this day also establish the fact that Baloch land is now under control of an alien state. This in turn compels the Pakistani state to stop the celebrations of this day with the might of force. Therefore, the increasing momentum in freedom movement has also increased the intensity of brutalities.

On one hand, Baloch pro-freedom forces increase their activities to celeberate 11 August, while on the other hand Pakistani security forces also do the same to observe 14 August. The security forces do not leave any stone unturned to make the day’s celebrations count. They do not even refrain from resorting to the use of force. Similarly, the Baloch armed groups also use brute force to disturb celebrations of 14 August.

Like previous years, the Baloch youth this year again decided to stay away from “imposed” celebrations of 14 August. However, Pakistani security forces were seen waving Pakistani flags on electricity poles and government buildings. Scores of new military checkpoints were also installed for the protection of these flags as Baloch youth traditionally burn down Pakistani flags.

The unusual aspect of this year’s celebrations was participation of thousands of civilians from Sindh and Punjab. These civilians were brought in special buses to make the events of 14 August successful. University students were also brought fromother  parts of Pakistan under the pretext of study tours.

There were also reports that Baloch students from different educational institutions were forced to participate in events of the day. According to one report, at least 40 school children from Awaran were “abducted” and forced to participate in celebrations. Security forces also distributed Pakistani flag lapel pins at checkpoints and forced the civilians to wear it. Many were beaten upon refusing to wear the badges.

Similarly, the Baloch armed groups were also seen portraying their might. Pakistani forces were attacked more than 100 times in a short span of only three days. This includes two main attacks, which happened in Quetta and Harnai. More than a dozen personnel of Pakistani forces died when a truck carrying them was targeted by United Baloch Army (UBA) in Quetta. In an attack by Baloch Liberation Army (BLA) at least 10 personnel died in Harnai, Bolan. These attacks were also reported in Pakistani media, which normally refrains from reporting armed activities in Balochistan.

Many other attacks were also carried out by BLF, BLA, BRA, UBA, BRG and Lashkar e Balochistan.

Pakistani forces also retaliated against these attacks. In one such retaliation mortars fired by Pakistani forces against Baloch fighters landed on civilian population. Scores were also abducted from different areas by Pakistani forces and taken to undisclosed locations. Military operations with aerial support were also carried out in Bolan, Noshki, Panjgur and Kohlu. Many women were also taken away from Harnai and Noshki.

August has already proven itself a brutal month for Balochistan once again.