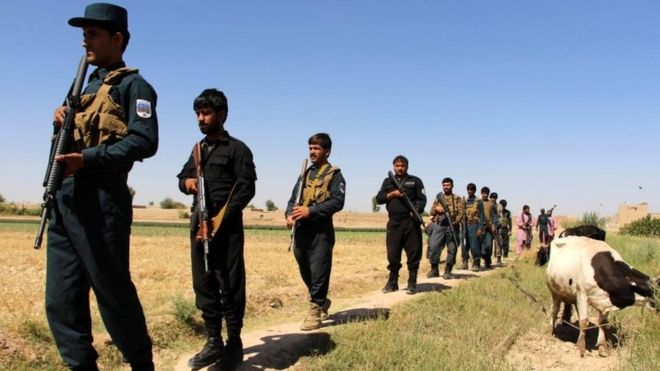 Three US special forces soldiers have been shot dead by an Afghan colleague during an operation in eastern Afghanistan, US officials say.

A spokesman for the governor in Nangahar province said an Afghan commando had opened fire on the US troops during a joint operation in Achin. He was shot dead in return fire.

Another US soldier was reportedly wounded in the attack.

A spokesman for the Taliban said it had carried out the attack.

Earlier, at least two Afghan policemen were killed by US forces in a so-called friendly fire incident in southern Afghanistan.

The deaths are said to have occurred when a US aircraft returned fire during a joint operation in the restive province of Helmand.

It is reported to be the first friendly fire incident in Helmand since US Marines returned there in May.

Taliban insurgents have made widespread gains in the province.

In a statement, the US military apologised for the incident and said that an investigation had been launched.

It happened as police were on patrol in volatile Nad Ali district. The dead were members of the Afghan Border Police.

Afghan officials told AFP news agency that the policemen were patrolling too close to a Taliban base prior to the attack. They say a number of militants were also killed in the strike.

In recent months, the Taliban have captured several districts in Helmand and put provincial capital Lashkar Gah under pressure.

The arrival of hundreds of US Marines – following the withdrawal of US troops three years ago – is part of the Nato-led effort to train and assist Afghan forces. They include special forces who conduct separate counter-terrorism operations.